The Delhi government has started the process of preparing this solution under the guidance of Pusa Research Institute, and will be starting the process of spraying it on the fields across Delhi from October 11. Kejriwal also met the farmers and scientists to discuss the working and the efficacy of the process. 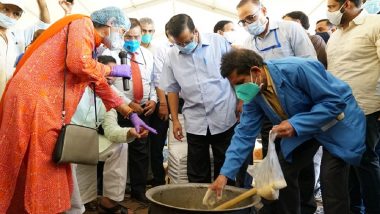 New Delhi, October 6: Chief Minister Arvind Kejriwal on Tuesday visited the Kharkhari Nahar village to review the bio-decomposer process, under which the capsules produced by Pusa Agricultural Institute are mixed along with readily available inputs to create a fermented liquid solution to be sprayed on the farm fields to soften the stubble to curb stubble burning. He said that the entire cost of the process of creating the liquid solution for spraying it on 700 hectares of farm fields in Delhi is just Rs 20 lakhs, which proves that it is a cheap alternative for the farmers and can be adopted by neighboring states. Arvind Kejriwal to Launch ‘Green Delhi App’ to Combat Pollution.

Today onwards, the Delhi government has started the process of preparing this solution under the guidance of Pusa Research Institute, and will be starting the process of spraying it on the fields across Delhi from October 11. Kejriwal also met the farmers and scientists to discuss the working and the efficacy of the process.

Addressing the media, Kejriwal said, "The harvesting of paddy leaves behind hard stubble on the farm fields. One of the main issues faced by farmers was to get rid of the stubble on the farm fields, owing to the less time between the harvesting and sowing season of the crops. The farmer then used to resort to stubble burning, due to which the healthy bacteria on the farm fields used to get damaged. The smoke came as a health hazard for the farmers and their families and people living in those villages, and used to cover the entire North Indian region."

"I am happy that our Pusa Research Institute has devised an effective, cheap, and an extremely simple solution to deal with the issue. They have produced capsules which are then mixed with a liquid fermented solution, which when sprayed on the fields, softens the stubble left behind. The hard straw then gets converted into manure and improves the fertility of the soil. This is going to be a very cost-effective alternative for the farmers, improve their crop produce and they will not have to burn the stubble. The reputed Pusa Research Institute was researching and was conducting pilots for 3-4 years," Kejriwal said.

"Delhi today has around 700 hectares of paddy fields. The Delhi government will be providing the mixture and the entire spraying system to the farmers free of cost. The process of preparing the solution goes on for about seven days, which has begun today. The spraying of this solution in various locations in Delhi from October 11. We sincerely hope that this system will prove to be successful. This is a very cheap alternative, the entire process of creating the solution to spraying it on the fields across the entire Delhi costs only around Rs 20 lakhs. I hope this will prove to be an effective alternative for the neighboring states as well," added the CM.

Kejriwal was accompanied by Delhi Environment Minister Shri Gopal Rai. "In Delhi, the stubble burning is significantly lesser than the neighborhood states. The stubble burning in Punjab, Haryana, Rajasthan and other states contribute nearly 45 percent of air pollution in Delhi. Keeping this in mind, the Delhi government and the Pusa Agricultural Institute has come up with this new idea of bio decomposers," Rai said.