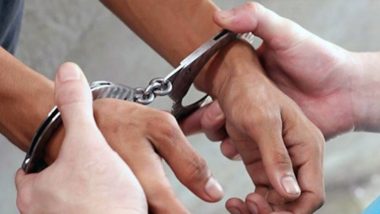 Hyderabad, June 25: Hyderabad police on Thursday arrested a 33-year-old cop on the charges sexually assaulting a minor girl. After the arrest, the accused was also produced in a court. The police constable has been identified as VS Umesh. He is currently working for the Hyderabad City Police. The incident took place two months ago.

According to a report published in Telangana Today, the family of the 12-year-old girl approached the police on Thursday. The family told the police that Umesh sexually assaulted the girl when she was alone in the house. He reportedly lured the girl to his house and then sexually assaulted her. The accused stays on the first floor of the same building in which the rape-survivor lives with her family. Delhi Police Head Constable, Who Allegedly Raped Minor Domestic Help in Mundka, Absconding.

“The child’s family lodged a complaint with us on Thursday and we have booked a case and are taking up investigation. The victim, along with her parent, was sent to the Bharosa Centre for recording her statement as per procedure,” reported the media house quoting C Anjaiah, Station House Officer, Bowenpally as saying. Reacting to the incident, Hyderabad Police Commissioner Anjani Kumar said that none is above the law. The top police official added that he felt ashamed that there were such black sheep in the department.

None is above law. We had to arrest a Constable of Ramgopalpet who molested a girl. He is being sent to jail. I feel ashamed that there are such black sheeps in our department. DO HELP US IMPROVE. Your feedback at 9490616555 will be our strength and guidance.

The rape survivor's mother first brought the issue to the notice of Balala Hakkula Sangham, a NGO working for child rights. The NGO then informed Additional Commissioner of Police Shikha Goel about the incident. Based on the 12-year-old girl's statement, police booked the constable under Indian Penal Code''s section 376 (3) (rape of a minor) and 506 (criminal intimidation) and also Protection of Children from Sexual Offences (POCSO) Act.

(The above story first appeared on LatestLY on Jun 25, 2020 09:01 PM IST. For more news and updates on politics, world, sports, entertainment and lifestyle, log on to our website latestly.com).