India has warned against "hoarding and speculation" running up prices of foodgrains to "unjustifiable" levels and urged for ensuring "equity" and "affordability" in the availability of food to all. 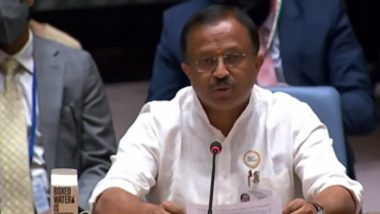 United Nations, May 20: India has warned against "hoarding and speculation" running up prices of foodgrains to "unjustifiable" levels and urged for ensuring "equity" and "affordability" in the availability of food to all.

"Open markets must not become an argument to perpetuate inequity and promote discrimination," said Minister of State for External Affairs, V. Muraleedharan on Thursday at the Security Council debate on 'Conflict and Food Security'.

The session was convened by the US, which is the Council President for this month, in an effort to draw attention to the growing threat of starvation.

US Secretary of State, Antony Blinken said according to the Food and Agriculture Organisation, and the World Food Programme (WFP), the number of people affected by food insecurity due to conflict rose from nearly 100 million people in 2020 to 139 million in 2021 and the World Bank believes that Russia's war in Ukraine could add another 40 million people. India’s April Wholesale Inflation at 15.08%, Up From 14.55% in March.

He accused Moscow of weaponising food by blocking exports from Ukraine.

He denied Russian claims that the US sanctions were blocking food exports and said food, seeds and fertilisers were exempted.

Russia and Ukraine provide nearly 30 per cent of wheat exports and the war has disrupted international supplies leading to the crisis.

"Last year, most of the 140 million people suffering acute hunger around the world lived in just ten countries: Afghanistan, Congo, Ethiopia, Haiti, Nigeria, Pakistan, south Sudan, Sudan, Syria and Yemen" and of them, eight were on the agenda of this Council because of conflicts, Guterres added.

And "the war in Ukraine is now adding a frightening new dimension to this picture of global hunger," he said.

He added: "It is clear that hoarding and speculation are at work. We cannot allow this to pass unchallenged."

He referred to the problem with the availability of Covid-19 vaccines to developing countries when the pandemic was at its worst in warning against making "open markets" paramount.

Muraleedharan said: "It is necessary for all of us to adequately appreciate the importance of equity, affordability and accessibility when it comes to food grains. We have already seen to our great cost how these principles were disregarded in the case of Covid-19 vaccines."

India "has recognised the sudden spike in global prices of wheat which put our food security and those of our neighbours and other vulnerable countries at risk," he added and reiterated India's offer to send foodgrains to them despite the restrictions on commercial exports.

"We are committed to ensuring that such adverse impact on food security is effectively mitigated and the vulnerable cushioned against sudden changes in the global market," the Union Minister said.

Criticising the World Trade Organisation restrictions on wheat exports because India's stocks are made up of procurement from farmers at support prices, Muraleedharan added, "The growing shortage can only be addressed by going beyond constraints that bind us presently."

He said, "In this context, we welcome Secretary-General's call for exempting purchases of food by WFP for humanitarian assistance from food export restrictions with immediate effect. But we need to go beyond that to make a real difference."

Regarding food security within India, the Union Minister added: "India is running the world's largest food-based safety net programme, which has seen a paradigm shift from welfare to a rights-based approach."

Muraleedharan stressed diplomacy and dialogue to end the Ukraine conflict and without this course "there will be severe repercussions in the global economy".

Blinken, however, said, "In this council, a few members have repeatedly used language lamenting the suffering caused by this war and calling on 'all sides' to bring it to an end. Let's not use diplomatic language to obfuscate what are simple facts: The decision to wage this war is the Kremlin's, and the Kremlin's alone."

(The above story first appeared on LatestLY on May 20, 2022 11:28 AM IST. For more news and updates on politics, world, sports, entertainment and lifestyle, log on to our website latestly.com).