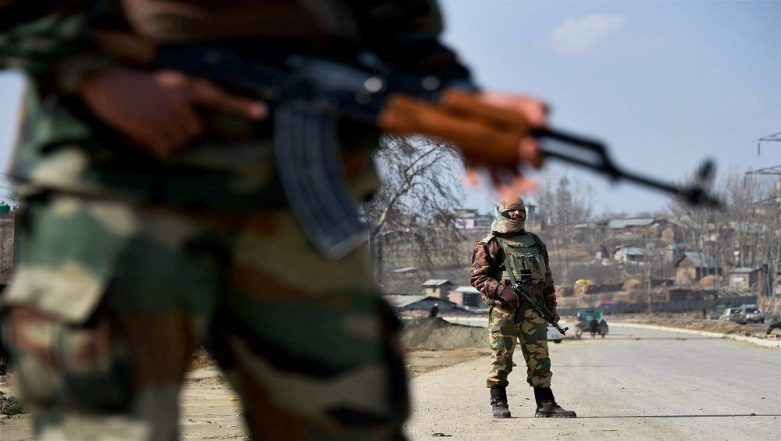 Pulwama, October 25: An Indian Army soldier was martyred in a terrorist attack on 42 Rashtriya Rifles' camp at Tral in Pulwama district of Jammu and Kashmir on Thursday night, while another jawan received injuries. As per reports, terrorists opened fire upon the army camp at around 8:35 pm. In the attack, two soldiers injured were evacuated to army’s 92 base hospital Badamibagh, Srinagar. One of them succumbed to the injuries. The martyred soldier has been identified as Sepoy NG Leena. Jaish-e-Mohammed Planning Major Attack In India; 100 Suicide Attackers Take Oath In PoK

The army retailed with heavy firing. The area has been cordoned off to nab the terrorists. The Jaish-e-Mohammed has claimed the responsibility for the attack. Earlier in the day, in two separate encounters, six terrorists were neutralised by the security forces in the Kashmir valley. The four terrorists were killed in Bijbehara's Arwani in Anantnag district, while the remaining two were gunned down in Baramulla district.

Meanwhile, the remaining the two terrorists were in a joint operation by the 29 Rashtriya Rifles, special operations group (SOG) of J&K police and the Central Reserve Police Force (CRPF) in Keeri area of Baramulla district. The encounter started after the terrorists fired upon the security personnel during a cordon and search operation.