Bezos returned as the world's richest man with a net worth of $191.2 billion. Tesla shares fell, resulting in a slight erosion in Elon Musk' wealth. Tesla shares were down 2.4 per cent on Tuesday and Musk lost $4.6 billion. 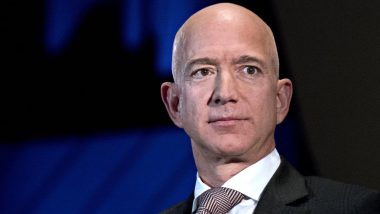 He took the top spot from Bezos, who had held it since 2017.

Musk's net worth increased by more than $150 billion and Tesla's share price surged a massive 743 per cent last year. Tesla last week announced it has invested $1.5 billion in the Bitcoin cryptocurrency. The announcement led to a surge in the price of one Bitcoin, that has even surpassed $50,000 per coin.

Tesla said it will also "begin accepting Bitcoin as a form of payment for our products in the near future." After vouching for Bitcoin, Tesla CEO Elon Musk has now said that if major Dogecoin cryptocurrency holders sell their coins, he will give them his full support.

(The above story first appeared on LatestLY on Feb 17, 2021 12:28 PM IST. For more news and updates on politics, world, sports, entertainment and lifestyle, log on to our website latestly.com).