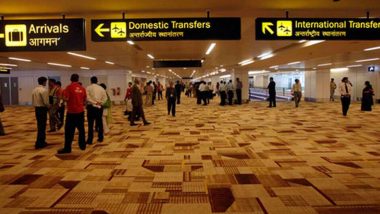 Trivandrum, May 25: With the commercial domestic aviation services restarting in the country on Monday, it appears the Aarogya Setu app is not a requirement at the Thiruvananthapuram airport. A passenger who arrived from Delhi on the first flight that landed here on Monday told IANS that no one asked him about Aarogya Setu app inside or outside the airport here. 'Aarogya Setu App Mandatory For All Air Passengers Except For Those Below 14': List of Guidelines Mentioned in AAI SOP Ahead of Resumption of Domestic Flights in India.

"When I entered the Delhi airport, I was asked if I have Aarogya Setu app and I said yes. Then I was allowed to enter the airport. In the aircraft what I could see was social distancing was maintained. There was no in-flight service of any sort during the flight," said the passenger who did not wished to be identified. Domestic Air Travel Resumed in India; 532 flights Carrying 39,231 Passengers Operated on Monday, Says Hardeep Singh Puri.

After landing at the airport here, all were asked to pass through a thermal scanner.

"After that there is a health desk with a doctor and a few others. They asked me a few questions and I was let off as I had no symptoms. Then I had to fill a few forms and then went to a counter where I showed the pass that I had received when I first registered online two days back, before I booked my air ticket. The person manning the counter asked me all my details of where I will be staying and such things. After the registration was over, I got another pass and was allowed to go out of the airport," said the passenger and added no one asked him about the app.

"Outside I could see buses of the state-owned Transport Department and I took a car and reached my home, where I have been asked to be in quarantine for 14 days. Now I will be staying indoors till my quarantine period is over," added the passenger who works in Delhi.

According to rules here, anyone arriving in Kerala on flights, can go into state run quarantine centres, if they so wish or if they have a separate attached bathroom at their home can remain in it for two weeks, when the quarantine period will end.

(The above story first appeared on LatestLY on May 25, 2020 11:32 PM IST. For more news and updates on politics, world, sports, entertainment and lifestyle, log on to our website latestly.com).