Kotaiah, a retired headmaster from Nellore district of Andhra Pradesh who was administered herbal eye drops after contracting coronavirus (COVID-19), has died. 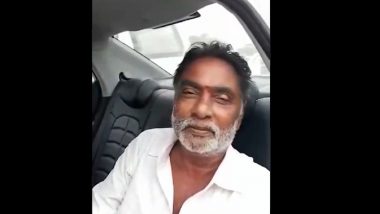 Nellore, June 1: Kotaiah, a retired headmaster from Nellore district of Andhra Pradesh who was administered herbal eye drops after contracting coronavirus (COVID-19), has died. A video in which Kotaiah was seen claiming that he was feeling better after receiving herbal eye drops at a medical camp in Krishnapatnam had gone viral. The retired headmaster died on May 31. Anandaiah Krishnapatnam Ayurvedic Medicine Given Green Signal by Andhra Pradesh Govt, No Approval For Eye Drops.

After testing positive for COVID-19, Kotaiah was administered herbal eyedrops prepared by a country medicine practitioner named Bonigi Anandaiah. On May 21, he claimed in a video that he "felt a lot better" after being administered the herbal eyedrops. However, the next day two more videos went viral. One showed Kotaiah in a serious condition lying in a car. Probe Ordered Into Andhra 'Ayurvedic COVID-19 Cure'; Drug Samples Sent for Analysis.

In the second video, Kotaiah's daughter was seen claiming that her father’s condition was good and he had recovered from COVID-19. Kotaiah was admitted to Government General Hospital in Nellore on May 23. "His lungs were affected more than 90 percent. Blood pressure and sugar level were abnormal," Dr Sophia, a doctor at the hospital, was quoted as saying.

Kotaiah's condition deteriorated on May 29. Subsequently, he was put on oxygen support. He died on May 31. According to a report by The News Minute, the herbal treatment that the retired headmaster had received was allowed despite there being no proof of the herbal concoction curing COVID-19 and not being harmful.

The treatment was allowed because of YSRCP MLA Kakani Govardhan Reddy and despite lack of permission from district authorities, said the report. Around 24 other COVID-19 patients who had taken Anandaiah’s treatment were hospitalised and many had complained of eye irritation, the report added.

(The above story first appeared on LatestLY on Jun 01, 2021 12:22 PM IST. For more news and updates on politics, world, sports, entertainment and lifestyle, log on to our website latestly.com).