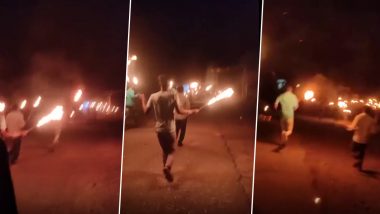 Agar Malwa, April 22: A video of locals in Ganeshpura village of Madhy Pradesh's Agar Malwa district running with burning torches and chanting "bhag corona bhag" (run corona run) emerged on social media recently. According to reports, the villagers believe it will drive away the coronavirus and protect them from the pandemic. The video of the incident which took place on April 18 went viral on social media. 'No Corona, Corona No': Ramdas Athawale Gives New Slogan for Mutated Coronavirus Strain (Watch Video).

The locals believe if the burning torches are thrown out of the village, they will escape the wrath of the pandemic. The practice should be performed on a Sunday or Wednesday night, they have been told by elders. One of the residents said that many people in the village had fever. However, after they performed the ritual, no case of the disease has been found in the village, he claimed.

Last year, the chant of "go corona go" became viral thanks to Union Ramdas Athawale who raised the slogan with Chinese Consul General in Mumbai Tang Guocai and Buddhist monks at a prayer meet.

(The above story first appeared on LatestLY on Apr 22, 2021 01:44 PM IST. For more news and updates on politics, world, sports, entertainment and lifestyle, log on to our website latestly.com).