Madhya Pradesh: Man in Ratlam Beaten Up for Urinating in Front of Cow, One Held 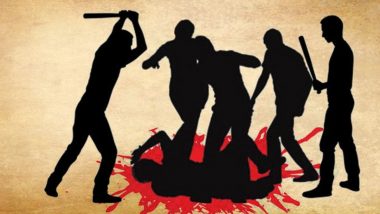 Bhopal, January 29: A man was arrested after he was caught on video beating up and abusing a person for allegedly urinating in front of a cow in Madhya Pradesh's Ratlam district, police said on Saturday.

A video of Rathod beating up the victim identified as Saifuddin Patliwala for allegedly urinating in front of a cow went viral on social media, it was stated.

After the video went viral, the police tracked down the victim, and following a complaint from him, the accused was arrested, Manik Chowk police station in-charge Sachin Dabar said. Madhya Pradesh: Man Booked on Charges of Rape and Extortion in Bhopal.

The purported video shows the victim apologising as the accused alleges that he had urinated in front of a cow. The accused proceeds to slap the victim, even as the latter apologised repeatedly.