A 35-year-old civic employee allegedly committed suicide here in Maharashtra, minutes after going live on Facebook to inform his friends and relatives about the decision to end his life, police said on Wednesday. 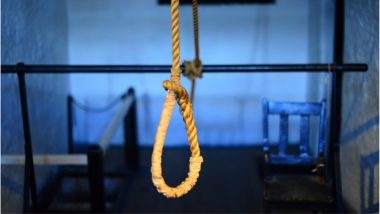 Thane, January 22: A 35-year-old civic employee allegedly committed suicide here in Maharashtra, minutes after going live on Facebook to inform his friends and relatives about the decision to end his life, police said on Wednesday.

Mandar Bhoir, who worked with the city civic body's water supply department, hanged himself at his home in Charai area on Monday, an official at Naupada police station said. He was not reporting to work since sometime and was living alone as his wife had separated from him and taken their child along with her, he said. He was depressed and he had some debt on him, the official said. West Bengal: 27-Year-Old Goes Live on Facebook After Stabbing Family.

On Sunday night, Bhoir created a poster of his "own condolence" and posted it on Facebook. His friends called him and tried to pacify him, but in vain, he said. On Monday morning, he went live on Facebook, saying he has decided to end his life as "no one understood him", the official said.

A little later, when his friends tried calling him, they did not get any reply and alerted the police. Personnel from the Naupada police station then rushed to Bhoir's home, broke open the door and found him hanging from the ceiling, the official said, adding that a number of liquor bottles were found scattered around the room.

An accidental death report was registered, he said, adding further probe was underway. When contacted, Thane's assistant municipal commissioner Mahadev Jagtap, who is also in-charge of the civic body's personnel department, said they were not aware of the incident and would find out about it.