Maharashtra Budget 2021 Highlights: From Concession in Stamp Duty for Women To Increase in Tax on Liquor, Here Are Key Takeaways

The Maharashtra government's budget for 2021-22, presented on International Women's Day, offered one per cent concession in stamp duty if property is transferred exclusively in women's name. Deputy Chief Minister and finance minister Ajit Pawar on Monday presented a budget with revenue deficit of Rs 10,226 crore in the state Legislative Assembly. 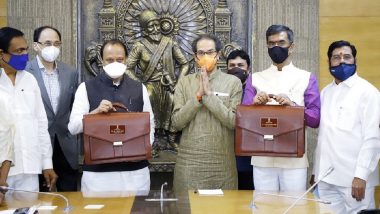 Mumbai, March 8: The Maharashtra government's budget for 2021-22, presented on International Women's Day, offered one per cent concession in stamp duty if property is transferred exclusively in women's name. Deputy Chief Minister and finance minister Ajit Pawar on Monday presented a budget with revenue deficit of Rs 10,226 crore in the state Legislative Assembly.

While the revenue collection in the coming fiscal was estimated at Rs 3,68,987 crore, revenue expenditure was estimated at Rs 3,79,213 crore. The size of the annual plan is proposed at Rs 1,30,000 crore, the minister said. The coronavirus pandemic had an unprecedented impact on the state's economy, said Pawar, informing that the tax revenue as per the revised estimates for 2020-21 is expected to be Rs 2,18,263 crore. Maharashtra Budget Session 2021: 36 People Test COVID-19 Positive in State Legislative Assembly.

"On International Women's Day, I propose concession in stamp duty of 1 per cent over the prevailing rate exclusively to women, provided the transfer of house property or registration of sale deed is in the name of woman or women only," he said. "Due to this concession, there will be revenue shortfall of around Rs 1,000 crore," Pawar added.

He proposed to increase the State Excise Duty on liquor. Country liquor will be classified into two categories -- branded and non-branded -- and State Excise Duty will be levied at 220 percent of manufacturing cost or Rs 187 per litre, whichever is higher, only on branded country liquor. This is expected to fetch additional Rs 800 crore.

This is estimated to bring additional revenue of Rs 1,000 crore, Pawar said. A provision of Rs 58,748 crore was made for infrastructure development. Fiscal deficit is estimated to be Rs 66,641 crore, the finance minister said.

Rs 7,000 crore have been allocated for the health sector, said Pawar, who presented his second budget as minister in the Shiv Sena-NCP-Congress government. "The state will complete the Mumbai coastal road before 2024 while connecting the Navha Sheva-Shivadi under- construction road with the Worli-Bandra Sea Link," he said.

The Worli-Bandra Sea Link on the Mumbai's western coast in also being extended further to Virar in the north which will reduce the load on the arterial Western Expressway, Pawar said. Travelling by state transport buses to school will be free for girls, he announced.

The MSRTC, the state's transport department, will get 15,000 hybrid buses in coming fiscal, Pawar said. For farmers, interest on crop loans of up to Rs 3 lakh will be waived if the loan is repaid in time. The state will also construct 235-km Pune- Ahmednagar-Nashik railway track, the minister annouonced.

New government medical colleges will be set up in Sindhudurg, Osmanabad, Raigad and Parbhani districts. A new ring-road costing Rs 24,000 crore will be built in the limits of Pune Municipal Corporation, the country's largest civic body in terms of area.