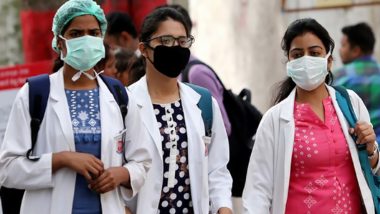 The Covid situation overall continued to remain grim as a massive vaccine shortage loomed ahead with barely one and half days' stocks available, leading to a fresh 'vaccine war' between Maharashtra and the Centre.

Of the fatalities, Pune led the state with 46 deaths, while there were 36 in Nagpur, 32 in Hingoli, 28 in Palghar, 27 in Nashik, 26 in Nanded, 25 in Mumbai, 23 in Thane, 21 in Solapur, 15 in Ahmednagar, 12 in Satara, 10 each in Parbhani, and Osmanabad, eight deaths each in Dhule, Sangli, and Amravati, five each in Jalgaon and Akola, four each in Nandurbar, Ratnagiri, Aurangabad, and Beed, three each in Raigad and Latur, two each in Kolhapur, Buldhana, and Washim, and one in Chandrapur, besides two outsiders.

Meanwhile, the number of people sent to home isolation shot up to 27,02,613, while those shunted to institutional quarantine went up to 22,661.

(The above story first appeared on LatestLY on Apr 09, 2021 12:08 AM IST. For more news and updates on politics, world, sports, entertainment and lifestyle, log on to our website latestly.com).