The High Court in its order said that according to the information furnished by the Secretary, Mining and Geology Department, a large number of coke oven plants and ferro alloys plants are operating in the state but only a limited few have both consent to establish and consent to operate granted by the Meghalaya State Pollution Control Board. 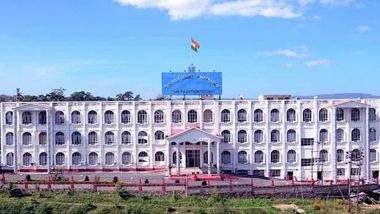 Shillong, December 8: The Meghalaya High Court, criticising the state government, has said that despite several orders from the Supreme Court, National Green Tribunal (NGT), High Court, illegal mining of coal continues in the state, with possible 'state participation and even encouragement'.

The full bench of the High Court, comprising Chief Justice Sanjib Banerjee and Justices H.S. Thangkhiew and W. Diengdoh, slamming the state government on Wednesday said that illegal mining continued despite the court's several orders issued as a consequence of the ban imposed by the NGT which was upheld by the Supreme Court. Supreme Court Criticises Centre on Judicial Appointment Issues, Asks to Adhere to Existing Legal Position.

Since previous orders of this court had indicated that the concerned Superintendent of Police would be held in contempt if illegal mining or transportation of illegally mined coal was discovered within his jurisdiction, let a rule of contempt be issued against the Superintendent of Police, East Jaintia Hills district, based on the report of December 3 filed by the Deputy Commissioner of the district, the court said.

The status after further verification, as indicated in the latest report filed by Justice B.P. Katakey (retired), is that prior to the imposition of the ban, the total quantum of coal available was 19,54,258 M.T. Justice Katakey has been appointed to implement the directions issued by the NGT and the Supreme Court, and has recently filed the ninth interim report. Meghalaya High Court Asks Shops, Commercial Vehicles to Display COVID-19 Jab Status of Employees.

The High Court in its order said that according to the information furnished by the Secretary, Mining and Geology Department, a large number of coke oven plants and ferro alloys plants are operating in the state but only a limited few have both consent to establish and consent to operate granted by the Meghalaya State Pollution Control Board.

Noting that apart from the fact that several coke oven and ferro alloys plants are operational without due permission, the source of coal at these plants has neither been identified nor reported on by the state, the court directed to the Secretary, Mining and Geology Department to identify the source of coal and the Chief Secretary would be responsible in this regard.

The report furnished by the Deputy Commissioner of East Jaintia Hills district on December 3 reveals attempts at illegal mining of coal in the recent past including blasting that has endangered the Krem Lait Prah cave situated at Shnongriam.

The Deputy Commissioner has also reported that directions have been issued to the relevant Magistrate to undertake frequent inspections and to impose prohibitory orders under Section 144 of the CrPc. As to the transportation and auction of the previously mined coal, the exercise should proceed as planned.

The remainder of the coal out of the approximately 32,56,715 M.T. of coal as indicated in the Chief Secretary's report of September 20 has also to be auctioned since that is illegally mined. The directions issued by Justice Katakey on the transportation and auction of the previously mined coal should be adhered to and the drone videography and photography should be completed without undue delay, the court said.

Justice Katakey would oversee the transportation and sale of even such part of the coal and any further quantity that may be seized by the state as a consequence of the illegal mining that continues, the HC said. The next hearing on the matter will be held on February 7. In April 2014, NGT had banned the indiscriminate and hazardous rat hole coal mining in Meghalaya.

Many workers got trapped in the illegal and unsafe mines and subsequently died -- five in May/June last year but only three bodies were retrieved from the flooded coal mine after hectic efforts for over 27 days in East Jaintia Hills district.

In December 2018, in a major tragedy in the same district, 15 migrant miners from Assam died inside an abandoned coal mine. The 15 miners, whose bodies were never found, had been stuck in the coal mine at a depth of nearly 370 feet after a tunnel was flooded with water from the nearby Lytein river.

(The above story first appeared on LatestLY on Dec 09, 2022 12:00 AM IST. For more news and updates on politics, world, sports, entertainment and lifestyle, log on to our website latestly.com).