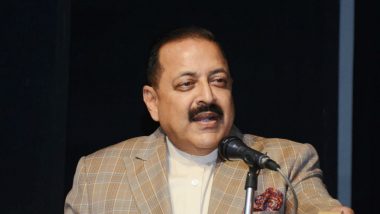 New Delhi, July 14: Senior Bharatiya Janata Party (BJP) leader and Union Minister Jitendra Singh went into self quarantine after the party's Jammu & Kashmir unit president Ravinder Raina tested positive for COVID-19. A statement was issued by Singh on his Twitter handle on Tuesday to confirm that he would remain in self-isolation for next few days.

Raina's test report arrived earlier today. He had decided to undergo the test after being diagnosed with mild symptoms including fever. Raina had, on July 12, led a delegation of BJP leaders including Singh to Srinagar. Coronavirus Cases in Patna BJP Office: 24 People Found COVID-19 Positive Out of 110 Samples Tested.

"Have gone into self-quarantine with immediate effect from 4 pm today, after receiving the news about corona(virus) positive test of J&K BJP president Shri Ravinder Raina who had accompanied us from Srinagar to Bandipora on 12th July," Singh said.

Have gone into Self-Quarantine with immediate effect from 4 PM today, after receiving the news about #Corona positive test of J&K BJP President Sh Ravinder Raina who had accompanied us from Srinagar to Bandipora on 12th July.

Singh, 63, is a Minister of State (MoS) in the Prime Minister's Office (PMO). He holds the Independent charge for Personnel, Public Grievances and Pensions, Department of Atomic Energy and Department of Space.

Considered as one of the cornerstones of Modi government, Singh was first elected to the Lok Sabha in 2014 - after he defeated Congress heavyweight Ghulam Nabi Azad from the Udhampur constituency in Jammu. The seat was retained by him in the 2019 general elections.

(The above story first appeared on LatestLY on Jul 14, 2020 05:16 PM IST. For more news and updates on politics, world, sports, entertainment and lifestyle, log on to our website latestly.com).