If not treated on time, the mucormycosis infection can turn fatal. Covid medication can leave the body weak and low on immunity. They can also escalate the blood sugar levels in both diabetics and non-diabetic Covid-19 patients. 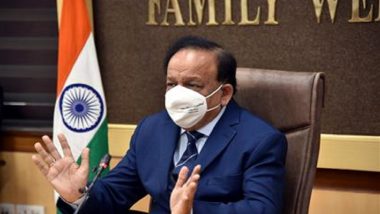 New Delhi, June 7: A total of 28,252 cases of mucormycosis have been reported in India so far from 28 states in which 86 per cent have a history of Covid-19 infections and 62.3 per cent of diabetes, the Central government said on Monday. Union Health Minister Harsh Vardhan said this while chairing the 28th meeting of the high-level Group of Ministers on Covid-19 through a video-conference, here.

Mucormycosis is one of the rapidly spreading infections observed in patients recovering from Covid-19. Mucormycosis is a serious but rare fungal infection caused by a group of molds called mucormycetes that has been developing in Covid-19 patients. The fungal disease is commonly being observed in patients who were given steroids for a long time, who have been hospitalised for a long time, were on oxygen support or ventilator, faced poor hospital hygiene or those who have been taking medication for other illnesses such as diabetes.

If not treated on time, the mucormycosis infection can turn fatal. Covid medication can leave the body weak and low on immunity. They can also escalate the blood sugar levels in both diabetics and non-diabetic Covid-19 patients.

Speaking on vaccines and clinical intervention, Harsh Vardhan observed: "Till Monday morning, we have administered 23,27,86,482 vaccine doses to our countrymen in various categories."

Talking specifically about the 18-44 age group, the first dose has been given to 2,86,18,514 people, the Minister said, adding: "As of today (Monday), over 1.4 crore doses are still available with the states."

In the second wave, the Minister said we see that continuously daily cases are declining and are outnumbered by new recoveries 83 per cent of active cases are in 10 states and the remaining 17 per cent in 26 states and Union Territories. Mucormycosis: Doctors at Sarojini Naidu Medical College in Agra Successfully Operate on Newborn Infected with Black Fungus.

Seven states and UTs (Delhi, Madhya Pradesh, Rajasthan, Haryana, Gujarat, Uttarakhand and Jharkhand) have less than thousand cases. Five state and UTs (Jammu, Punjab, Bihar, Chhattisgarh and Uttar Pradesh) have less than two thousand cases. Even the most affected states like Maharashtra, Kerala, Karnataka and Tamil Nadu have observed decline in the number of cases at a significant rate. Growth rate has declined from 14.7 per cent (May 5) to 3.48 per cent (today), said the Minister.

(The above story first appeared on LatestLY on Jun 07, 2021 09:19 PM IST. For more news and updates on politics, world, sports, entertainment and lifestyle, log on to our website latestly.com).