Mumbai Shocker: Senior Citizen Dies After Being Hit With Tubelight on Head During Argument Over Loud Music in Ghatkopar; Complaint Registered

After the incident came to light, cops registered a murder case against the accused. An officer from Ghatkopar police station said, "Patil, who works with the municipal corporation, had warned the trio earlier too." 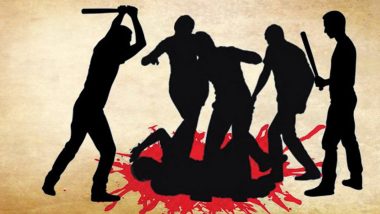 Mumbai, December 7: In a shocking incident that took place in Mumbai, a fight over playing loud music led to the death of 70-year-old man. As per reports, the senior citizen was allegedly attacked by three men when he tried to intervene during an argument between them and his son. Police officials said that the deceased has been identified as Ramchandra Patil.

According to a report in the Hindustan Times, the man who was attacked by the men died after he succumbed to his injuries late on Monday night. An officer said that the argument took place between the three men and the deceased's son, after he asked them to stop playing songs on their phones outside his house. Mumbai Shocker: Drunk Man Rapes Wife, Inserts Plastic Object in Her Private Part in Mulund; Arrested for Unnatural Sex.

Police officials said that the three accused used to sit on a wall outside the chawl at Ghatkopar's Narayan Nagar. They used to play games and even play songs on their phones. On November 27, Patil's son Nandu asked the trio to sop playing music as it disturbed him and his family.

Nandu's request angered the trio who allegedly attacked him. Later, they also attacked his father when tried to intervene between them. After the incident came to light, cops registered a murder case against the accused. An officer from Ghatkopar police station said, "Patil, who works with the municipal corporation, had warned the trio earlier too." Mumbai Shocker: Five-Year-Old Boy Sleeping With Mother on Kurla Railway Station Kidnapped, Rescued Within 12 Hours From Goregaon's Aarey Colony; Accused Arrested.

He further added, "On November 27, when he shouted at them, they attacked him with bricks and tubelights. They even attacked Nandu’s brother, Sudhakar." Amid the fight, Ramchandra suffered serious injuries to his head and started bleeding. He was immediately rushed to Rajawadi Hospital and later shifted to Vedant Hospital in Bhatwadi, where he succumbed to his injuries.

(The above story first appeared on LatestLY on Dec 07, 2022 10:48 PM IST. For more news and updates on politics, world, sports, entertainment and lifestyle, log on to our website latestly.com).