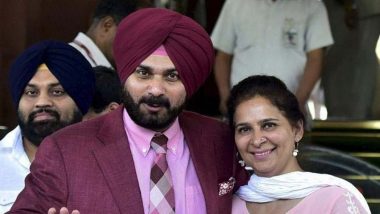 Amritsar, May 17: Indian National Congress leader Navjot Singh Sidhu on Thursday backed his wife Navjot Kaur Sidhu's claim that she was not given ticket due to Punjab Chief Minister Captain Amarinder Singh in the ongoing 2019 Lok Sabha elections. Singh, however, rejected Kaur's claim and said the former was offered a chance to contest from Amritsar but she refused. Who Will Win Chhattisgarh, Punjab, Delhi And Haryana Lok Sabha Elections 2019? Here's What Opinion Poll Predicts; Watch Video.

Responding to this claim by Punjab CM, the cricketer-turned-politician during a press conference asserted, "My wife has the courage and the moral authority that she would never lie." Punjab CM, Asha Kumari Denied Me Ticket from Amritsar: Navjot Kaur.

Punjab Minister & Congress leader Navjot Singh Sidhu on his wife Navjot Kaur Sidhu's claims that she was denied ticket due to Punjab CM Capt Amarinder Singh & the CM rejecting her claims: My wife has the courage and the moral authority that she would never lie. (16.05.2019) pic.twitter.com/T1JZzgeNLq

On May 14, the former MLA Navjot Kaur had alleged that it was Punjab Chief Minister and Congress Punjab affairs in-charge Kumari who ensured that she didn't get a ticket from the Amritsar Lok Sabha seat. Kaur, who wanted to contest from Chandigarh, had alleged that the CM had claimed that he alone was capable to lead the grand old party's victory on 13 Lok Sabha seats in the state.

"Capt Sahab and Asha Kumari think that Madam Sidhu (Navjot Kaur) does not deserve an MP ticket. My ticket from Amritsar was denied on grounds that I could not win because of a train accident in Amritsar on Dussehra (in October last year which left 60 people dead). Madam Sidhu cannot win, this was said by Capt and Asha Kumari," she had told reporters in Amritsar.

(The above story first appeared on LatestLY on May 17, 2019 08:58 AM IST. For more news and updates on politics, world, sports, entertainment and lifestyle, log on to our website latestly.com).