Asserting that the central government honours the farmers and it is ready to accept their logical suggestions on the three contentious farm laws, Prime Minister Narendra Modi on Wednesday declared that these laws are "optional and not compulsory". 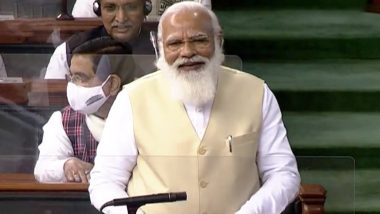 New Delhi, February 10: Asserting that the central government honours the farmers and it is ready to accept their logical suggestions on the three contentious farm laws, Prime Minister Narendra Modi on Wednesday declared that these laws are "optional and not compulsory". The Prime Minister made the announcement while speaking on the motion of thanks on the President's address in the Lok Sabha.

In the backdrop of the ongoing farmers' agitation on Delhi's borders for over two months, Modi said "rumours are being spread that these laws are against the farmers". The Prime Minister said that these laws were passed in Parliament in view of reforms in the agriculture sector as it was the need of the hour. President Ram Nath Kovind’s Address to Parliament Reflected India’s Sankalp Shakti, Says PM Narendra Modi.

He asked "whether these three farm laws snatched the facilities of farmers which they were getting earlier?" "There is no restriction on anyone. These laws do not create obstacles in the growth of farmers. These laws are optional, not compulsory. These acts neither stopped old 'Mandis' nor affected purchase of produce on Minimum Support Price (MSP)." Farmers' Protest: Centre Has Time Till October 2 to Repeal Farm Laws, Says BKU Leader Rakesh Tikait.

He said that the government had held various rounds of dialogue with the farmers even before they reached Delhi where they are agitating since November 26 seeking withdrawal of these laws termed as "black laws" and "anti-farmer laws".

"We are still ready to hold further rounds of talks with the farmers with open heart and take their suggestions on these three farm laws," Modi said. Reiterating that "neither any 'mandis' closed nor purchase on MSP ended after these laws were passed," the Prime Minister said in contrast we have provision to increase the number of mandis in this budget and the purchase on MSP has also increased compared to previous years.

The opposition created a ruckus when the Prime Minister was delivering his speech in the Lower House with Congress floor leader Adhir Ranjan Chowdhury repeatedly disrupting his address. Replying to the Congress leader's attempts, the Prime Minister said this "uproar is an attempt under pre-decided strategy".

"It will not help you (Congress) in gaining support of people. Farm reforms are very important. It is necessary. Congress members should have discussed on content and intent of these farm laws, they should not misguide farmers and spread rumours."

(The above story first appeared on LatestLY on Feb 10, 2021 06:08 PM IST. For more news and updates on politics, world, sports, entertainment and lifestyle, log on to our website latestly.com).