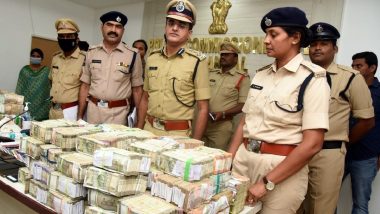 Hyderabad, November 29: Police in Telangana's Warangal town on Monday busted an online cricket betting racket with the arrest of two organisers and seized over Rs 2 crore cash. The organizers were running the racket mainly from Mumbai and were making customers through a website. They had received bets for the recent Twenty20 World Cup and India New Zealand Twenty20 series.

The Police Commissioner said the WhatsApp group in each mobile phone had 150-200 members. Explaining the modus operandi, he said the organisers were making customers and sending them links with username and password to participate in the online betting.

"The betting was for every ball and every player and the organizers were offering big returns if the winning chances of a team were low," he said.

The accused were also using their platform for other forms of betting and games like Teen Patti. The police official pointed out that all such games are prohibited in Telangana.

He said since indulging in betting is also an offence, the customers who lost the money had not lodged a complaint with police.

The commissioner said a team will be sent to Mumbai, from where the kingpin and other main organisers were functioning. They used to keep 80 per cent of the profit with themselves and transfer 20 per cent to regional organisers like Prasad. Professor Held for Running Prostitution Ring.

Police investigations revealed that Prasad was arrested in two betting cases in Hyderabad during 2019. Since he was under the police watch in Hyderabad, he shifted to Warangal a few months ago and continued his illegal activities.

Joshi said the accused had also acquired property from the money earned through betting racket. Police were conducting further investigation with regard to the property and were also analyzing their bank accounts.

(The above story first appeared on LatestLY on Nov 29, 2021 06:10 PM IST. For more news and updates on politics, world, sports, entertainment and lifestyle, log on to our website latestly.com).