The PFI members also used to go to the UAE to meet their associates. The agencies have learnt that the PFI had been receiving foreign funding in the name of Haj. 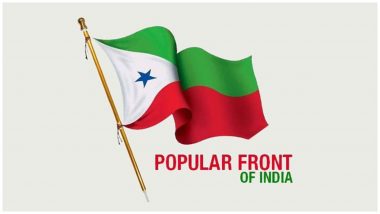 New Delhi, September 29: Banned Popular Front of India had its branches in other countries and each had a different name, sources have revealed. The PFI was active in Kuwait under the name of 'Kuwait India Social Forum (KISF)'. Sources in the National Investigation Agency (NIA) claimed that the KISF used to collect yearly membership fees from its members to support the activities of PFI in India.

The agencies have learnt that the Emirates Indian Fraternity Forum (EIFF) and Indian Cultural Society, which are based in Dubai, were PFI branches. The PFI's members used to send money into NRI accounts based in India. Later, they would transfer the amounts to the accounts of the PFI members, who would make the withdrawals. PFI Ban: List of Popular Front of India’s Associates and Fronts Declared As ‘Unlawful Associations’

The transactions were being done in violation of FERA as per the Enforcement Directorate (ED). The PFI members also used to go to the UAE to meet their associates. The agencies have learnt that the PFI had been receiving foreign funding in the name of Haj.  PFI Twitter Ban: Social Media Platform Account of Popular Front of India Withheld in India Day After Centre Banned Outfit Under UAPA

The sources also said that the PFI's cadre are worldwide and they were pushing the core agenda of the banned outfit through different means. Another alleged radical organisation, Dawat-e-Islamia is also functioning in the PFI's style and there are possibilities that a number of PFI cadre might join this organisation.

(The above story first appeared on LatestLY on Sep 29, 2022 04:53 PM IST. For more news and updates on politics, world, sports, entertainment and lifestyle, log on to our website latestly.com).