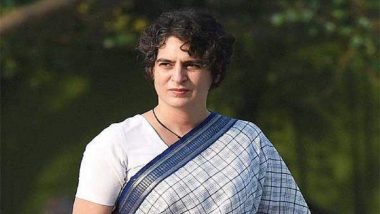 Bareilly, January 7: In a shocking statement, UP BJP president Swatantra Dev Singh has accused Congress general secretary Priyanka Gandhi Vadra of 'funding' violence in Uttar Pradesh. He alleged that she was 'bringing goons" from other states to foment trouble in the state.

"There was peace in UP for the last three years and I want to ask why Priyanka wants to cause riots here? Why doesn't she do it in MP and Rajasthan? She is funding violence and bringing goons from other states and making them pelt stones to disrupt peace," the BJP leader alleged while addressing a public meeting in Bareilly. Anti-CAA Stir: Uttar Pradesh Remains Tense as Death Toll Mounts to 15, Internet Remains Suspended in 15 Districts.

Referring to the Citizenship (Amendment) Act, he said, "Neither Nehru (Jawaharlal) nor Manmohan Singh could do this work while minorities in Afghanistan, Pakistan and Bangladesh suffered. They were forced to live a miserable life. For the first time, a political leader took this revolutionary decision and ensured CAA came into existence. CAA is meant for giving Indian nationality to refugees belonging to the minority community so that they can live a respectable life. They can get house under PM housing scheme and benefits under other government schemes."

Singh further clarified that CAA is not meant for withdrawing the nationality of any Indian Muslim though the opposition is misleading the people on this issue.

He further said, "Even Ram Manohar Lohia had said in the past that minorities in Pakistan faced a lot of difficulties and they should be given Indian citizenship. But Samajwadi Party does not remember the words of their founder because their leaders want to do politics for family benefits only."

(The above story first appeared on LatestLY on Jan 07, 2020 09:32 AM IST. For more news and updates on politics, world, sports, entertainment and lifestyle, log on to our website latestly.com).