Rangasamy returned from Delhi on Tuesday night after seeking additional central assistance of Rs 2000 crores to Puducherry during his meeting with the Prime Minister Narendra Modi and Union Finance Minister Nirmala Seetharaman. Everyone was left guessing the reason for adjournment of the House sine die. 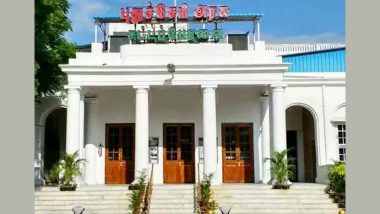 Puducherry, August 10: The Puducherry Assembly, which began its budget session on Wednesday with the customary address by Lt Governor Tamilisai Soundararajan adjourned sine die, in a first of its kind. Soundararajan presented her address in Tamil, which lasted 70 minutes. A motion of thanks to her address was tabled by BJP legislator A John Kumar and seconded by government whip A K D Arumugham of the AINRC.

Speaker R Selvam said that the House would have a debate on the motion of thanks to Lt Governor's address on a date which would be decided later. Selvam also announced that the House adjourned sine die. This was virtually the first time as there was expectation that there would be official announcement of date of presentation of budget for the fiscal 2022-2023 by the Chief Minister N Rangasamy.

Rangasamy returned from Delhi on Tuesday night after seeking additional central assistance of Rs 2000 crores to Puducherry during his meeting with the Prime Minister Narendra Modi and Union Finance Minister Nirmala Seetharaman. Everyone was left guessing the reason for adjournment of the House sine die. N Rangasamy, Chief Minister of Puducherry, Called on PM Narendra Modi.

Earlier all the opposition members belonging to the DMK and Congress wearing black shirts rose in revolt as soon as the Lt Governor started reading out her address, to register their protest against 'shortcomings' in the administration. They all staged a walk out after registering their protest against the Centre's 'silence' in responding to the plea for central assistance for the budget.

The opposition members also protested against the move of the Centre to privatise the distribution of the power supply and also failure to take care of the union territory. During her address to the Assembly, the Lt Governor said the territorial government has incurred an expenditure to the tune of Rs 9793.29 crores as against the total outlay of Rs 10,414 crores in 2021-2022 which works out to 94.04 percent of the total outlay.

Soundararajan noted that the expenditure incurred was the highest in the last four years. "In addition we have achieved a record high of 104 percent of revenue targets. The Government of India had also offered flexibility to decide sources of borrowings without exceeding the borrowing limit fixed under the net borrowing ceiling limit. This helps to avail borrowings at a lower cost and also to the maximum extent."

The Lt Governor further said the Gross State Domestic Product (GSDP) of Puducherry was estimated at Rs 38,285 crores (current prices) for 2021-2022 which is 2.90 percent higher than the previous year. The per capita income of Puducherry has increased from Rs 2,15,583 to Rs 2,16,495 (current price) for the year 2021-22 showing a growth rate of 0.42 percent. She highlighted several initiatives and achievements of the government, department wise during the previous year 2021-2022.

The territorial government is fully committed to provide education, health, clean drinking water, employment opportunities and to ensure socio-economic development of the people of Union Territory, she added. The Lt Governor said that `the long expectation of the travelling public is fulfilled by the Railway Board in approving the project proposal for the revised railway alignment between Puducherry and Cuddalore.

The Southern Railways has issued letter of acceptance for conducting final location survey and preparation of work plan and soil investigation. A sum of Rs 7.65 crores has been released for disbursement of Covid ex gratia to 1,531 families.