A travelling ticket examiner or TTE died after he slipped and came under a train at the Bareilly railway station in Uttar Pradesh. 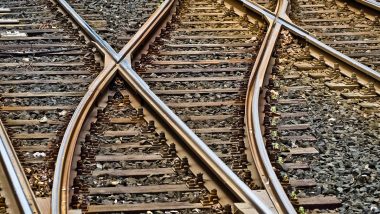 Bareilly, October 20: A travelling ticket examiner or TTE died after he slipped and came under a train at the Bareilly railway station in Uttar Pradesh. The accident took place during the wee hours of Tuesday. The deceased TTE, Darshan Pal from Moradabad, came under the Himgiri Superfast Express after he slipped while trying to deboard the train. He succumbed to his injuries on the spot. He was 46. Uttar Pradesh: Man Steals TTE’s Uniform and Challan Book, Extorts Fine From Railway Passengers; Arrested in Bijnor.

According to a report by Times of India, the Himgiri Superfast Express, which connects Howrah Junction in West Bengal and Jammu Tawi in Jammu and Kashmir, halted at the Bareilly Railway Station around 1 am. The platform was wet due to heavy rainfall in Bareilly. When Pal tried to get off the train, he lost his balance after his foot slipped. He fell in the gap between the platform and the train and died on the spot. Indian Railways Delhi TTE Helps Woman Deliver Baby on Train, Ministry of Railways Praises His Kind Act.

After the Moradabad Railway Control Room was informed about the accident, railway officials, including CIT Vijayant Kumar Sharma, visited the Bareilly railway station. "We informed his family members and took his body to his native place in Moradabad after the autopsy, where his last rites were conducted," Assistant Commercial Manager PS Baghel was quoted as saying.

Pal was a resident of Kanjari Saraiis in Moradabad. He is survived by his wife and three children - one daughter and two sons. Since the TTE died on duty, his family will receive compensation according to norms.

(The above story first appeared on LatestLY on Oct 20, 2021 12:55 PM IST. For more news and updates on politics, world, sports, entertainment and lifestyle, log on to our website latestly.com).