In a major reprieve to BJP leader Tajinder Pal Singh Bagga, the Punjab and Haryana High Court on Tuesday ordered continuation of his interim protection. But Justice Anoop Chitkara questioned Punjab on filing of a habeas corpus plea in the case. 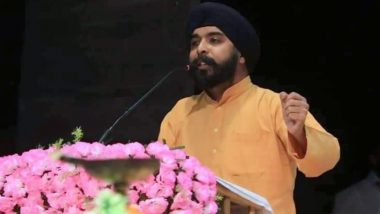 Chandigarh, May 10: In a major reprieve to BJP leader Tajinder Pal Singh Bagga, the Punjab and Haryana High Court on Tuesday ordered continuation of his interim protection. But Justice Anoop Chitkara questioned Punjab on filing of a habeas corpus plea in the case. The case will come up for final hearing on July 5 after the summer break.

Additional Solicitor General Satya Pal Jain refuted the allegations of illegal detention and said not even a single officer was detained. An affidavit in this regard has already been filed by the Delhi Police. BJP Leader Tajinder Pal Singh Bagga Arrested by Punjab Police, Says AAP MLA Naresh Balyan.

The High Court last week stayed the arrest of Bagga and directed the Punjab government to not take any coercive action against him until the next hearing which was scheduled for May 10. The BJP leader moved the High Court while challenging a non-bailable arrest warrant issued against him by a Mohali Court on May 7.

The Punjab government, in its habeas plea, had moved two applications: one for making the Centre a party to the case and the second for direction to Delhi and Haryana Police to preserve the CCTV cameras.

The state had filed the habeas corpus petition against the Haryana government, alleging that 12 Punjab Police officers involved in the arrest of Bagga have been detained by Haryana police in Kurukshetra.

Punjab also sought the custody of Bagga, the national secretary of the Bharatiya Janata Yuva Morcha, who was held in connection with a case registered against him in Mohali last month.

In its plea, the Punjab government had alleged that when Punjab Police was taking Bagga to SAS Nagar (Mohali) to produce him before the area magistrate, the Haryana Police stopped them midway and brought them to the Kurukshetra where his custody was given to the Delhi Police.

Delhi Police, which reports to the Union Home Ministry, on May 6 took Bagga's custody and later released him after legal process. It also lodged two cases against Punjab Police in connection with Bagga's arrest.

Punjab Police, while taking Bagga to Mohali from Delhi, was stopped midway by the Haryana Police after Delhi Police registered a kidnapping case on the complaint of father of the BJP leader.

(The above story first appeared on LatestLY on May 10, 2022 02:55 PM IST. For more news and updates on politics, world, sports, entertainment and lifestyle, log on to our website latestly.com).