Thane Rains: Part of Khartan Road Near Sheetla Temple Caved in After Incessant Rainfall, None Injured 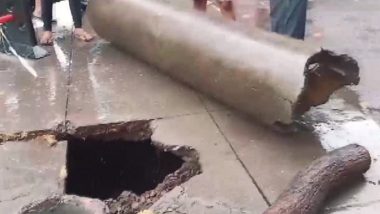 Thane, July 5: Due to incessant rainfall, a part of Khartan road, near Sheetla temple in Thane West caved in on Sunday.  Till now, no injuries have been reported in the incident. After receiving the information, senior officials have rushed to the area. More details are still awaited. Mumbai Rains: Heavy Rainfall Continues, Streets Waterlogged, BMC Issues High Tide Alert.

Heavy rains continued to lash Mumbai, Thane and other parts of Konkan Maharashtra for the third consecutive day on Sunday. It caused water-logging in some low-lying areas of the metropolis due to which traffic jams were also seen on roads. The India Meteorological Department (IMD) has forecast intermittent rains in the city and suburbs "with possibility of heavy falls" at isolated places in the next 24 hours.

The Colaba observatory in South Mumbai recorded 129.6 mm rain in the 24 hours ending at 8.30 am on Sunday while the Santacruz weather station in western suburbs recorded 200.8 mm rain during the same period. The neighbouring Thane district and some other areas in Konkan region, including Sindhudurg, also received very heavy rains. Some parts of Vidarbha received moderate rainfall, the IMD said, adding that thunderstorm with lightning is likely at isolated places in the region.

(The above story first appeared on LatestLY on Jul 05, 2020 04:07 PM IST. For more news and updates on politics, world, sports, entertainment and lifestyle, log on to our website latestly.com).