A 40-year-old woman was beaten to death by a group of men who had allegedly molested her daughter. The accused, who were out on bail, attacked the woman and her daughter on January 9. 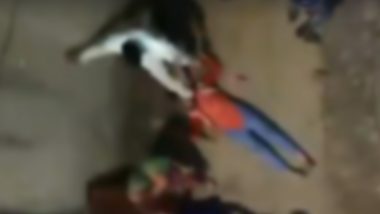 Kanpur, January 18: A 40-year-old woman was beaten to death by a group of men who had allegedly molested her daughter. The accused, who were out on bail, attacked the woman and her daughter on January 9. The woman succumbed to her injuries at a hospital in Uttar Pradesh's Kanpur on January 17. Four of the six murder accused were arrested by the Kanpur police in connection with the crime. Uttar Pradesh: Family of Six Set on Fire While Sleeping by Unidentified Miscreants in Meerut.

According to Kanpur SSP Anant Dev Tiwari, the deceased woman's 13-year-old daughter had accused Abid, Mintu, Mahboob, Chaand Babu, Jameel and Firoz of molestation in 2018. All four were arrested but later got bail. On January 9, a clash broke out between the accused and the victim's family members during which the woman was critically injured, Tiwari told news agency ANI. A video of the assault also surfaced on social media on Friday. Gorakhpur: 17-Year-Old Girl Stripped, Beaten Up by Two Men on Her Way to Police Station.

In the video, a woman in a red kurta is seen lying on the ground as a man dressed in a white kurta and trousers kicks her face. It remains unclear who shot the video. According to the police, four of the six accused have been arrested and efforts were on to nab the other two. One of the accused was arrested after an encounter. Reacting to the incident, Congress leader Priyanka Gandhi Vadra hit out at UP Chief Minister Yogi Adityanath.

"Chief Minister will lie again. Crores will be spent on fake advertisements. But the fact is criminals can do anything," Priyanka Gandhi wrote on Facebook, while sharing the video. The Chief Minister has not responded yet.

(The above story first appeared on LatestLY on Jan 18, 2020 09:13 AM IST. For more news and updates on politics, world, sports, entertainment and lifestyle, log on to our website latestly.com).