The BJP is necessary for the state’s development and with its farsightedness, it has brought positive changes which has enabled Uttar Pradesh regain its glory, said Chief Minister Yogi Adityanath on Friday. 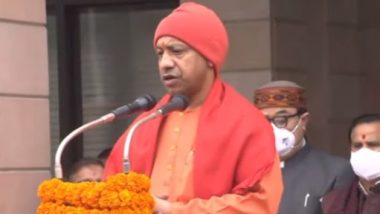 Lucknow January 28: The BJP is necessary for the state’s development and with its farsightedness, it has brought positive changes which has enabled Uttar Pradesh regain its glory, said Chief Minister Yogi Adityanath on Friday.

Addressing a ‘Prabhaavi Matdaata Samwad’ (Effective Voter Dialogue) in Hastinapur (Meerut), the Yogi Adityanath lashed out at the previous state governments helmed by the Samajwadi Party and the Bahujan Samajwadi Party over a host of issues, including law and order. Uttar Pradesh Assembly Elections 2022 Dates And Full Schedule: Voting in 7 Phases on Feb 10, 14, 20, 23, 27, March 3, 7; Counting And Results on March 10.

Targeting the Opposition, Adityanath drew a comparison between the SP’s regime in 2012 and the BJP forming the government in 2017.

“The first decision we took was to work with the policy of ‘Zero-Tolerance’ against crimes and criminals. We guaranteed development, growth and welfare of all. When the SP came to power in 2012, the first decision they took was to drop cases against the terrorists,” Yogi said.

The chief minister said that the SP allegedly provided shelter to professional mafias, and it incited a series of riots in places such as Kosi Kalan, Bulandshahr, Meerut among others and these ended only when they got a hint that the BJP was to return to power in 2017.

Adityanath said the state had witnessed mafia rule and open extortion during the previous governments but stressed that the situation has changed over the last five years.

The Chief Minister while highlighting the achievements of his government said, “Those who cannot stand up for you during a crisis and do not possess good and positive intent can never work for the welfare of all. The ones who did not provide electricity, will they give it for free? What do you expect from those who themselves had become a threat to their safety? Those who saved rioters and goons, will they be able to establish a riot-free state? They will continue to support the enemies of the nation for their own benefit.”

Furthermore, he said that the implementation of central and state government schemes has benefitted women in Uttar Pradesh. The previous governments did not even think about welfare of women, implementing the schemes were a far-fetched idea. “BJP is necessary for the development of the state,” said Yogi in presence of BJP MLA Dinesh Khatik, District President Vimal Sharma, among others.

Those who went into home-isolation, now asking for votes: CM

Yogi said that the leaders who were nowhere to be seen during the Corona crisis and who went into ‘Home-isolation’, are now being seen visiting places and asking for votes.

During their (SP) regime, there was no Corona, but they imposed curfews. We imposed only a night curfew during this third wave... we are giving free vaccines, free tests and treatment to all without any discrimination without any appeasement,” Adityanath said.

Payment of current season being done within 12 to 16 days: CM

In the last five years, more than Rs 1.56 lakh crore have been paid to sugarcane farmers. The payment in the current season is also being done within 12 to 16 days. Our government has done more for the farmers than what was done in the last 14 years.

Yogi also trained guns at the Congress along with the SP and the BSP over discrimination during their rule and said, “Their thought process is divisive and destructive while we believe in nationalism and inclusion of all communities. They promise to give free electricity. One should ask them what they did when they were in power. In those days, there was no electricity.”

Recalling freedom fighter Dhan Singh Kotwal in Hastinapur, CM Yogi said that he had sacrificed his everything for the country. He also remembered the messiah of farmers, Chaudhary Charan Singh, and said that he had found a way to keep the voice of farmers in independent India and solved the problems of farmers. His vision has been realised by Prime Minister Narendra Modi.

(The above story first appeared on LatestLY on Jan 28, 2022 09:45 PM IST. For more news and updates on politics, world, sports, entertainment and lifestyle, log on to our website latestly.com).