Abhishek Rajbhar, a class 2 student, was crushed to death under the wheels of an SUV belonging to local BJP MP Harish Dwivedi near Hardiya petrol pump of Basti district. 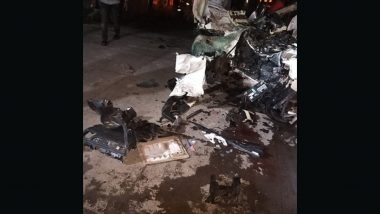 Lucknow, November 28:  The 'unidentified' driver of BJP MP in Uttar Pradesh's Lucknow has been booked after a SUV driven by him allegedly crushed a nine-year-old boy to death, police said.

Abhishek Rajbhar, a class 2 student, was crushed to death under the wheels of an SUV belonging to local BJP MP Harish Dwivedi near Hardiya petrol pump of Basti district. Punjab: Three Children Crushed to Death by Passenger Train While Playing Near Railway Track in Rupnagar.

The boy was referred to the trauma centre in Lucknow but he succumbed to injuries. The police lodged an FIR on Sunday evening after the CCTV of the incident went viral. Basti Superintendent of Police, Ashish Srivastava said that an FIR under the charges of causing death by negligence and rash driving or riding on a public way has been registered against the unidentified driver of the SUV belonging to the BJP MP and a probe is underway. Mumbai Shocker: Toddler Crushed to Death by Tempo While Playing on Road in Trombay; Driver Arrested.

"We will not spare the driver at the wheel of the SUV, who caused the incident. Two vehicles of the BJP MP have been spotted on the CCTV. An officer of CO rank is probing the case. The post-mortem of the boy has been conducted," he added.

The victim's father, Shatrughan Rajbhar, said that no action has been taken by police against the BJP MP or the driver so far despite the MP and his vehicle being clearly visible in the CCTV footage recovered from the spot of the incident.

Locals told reporters that the MP did not even turn up to pay his condolences to the family. Meanwhile, an 87-second CCTV footage recovered from the spot shows two SUVs after the incident, in which one of the SUVs' bumper is also damaged, police added.

(The above story first appeared on LatestLY on Nov 28, 2022 08:34 AM IST. For more news and updates on politics, world, sports, entertainment and lifestyle, log on to our website latestly.com).