At least eight persons have died following a gas leak in a chemical factory in RR Venkatapuram village in Andhra Pradesh's Vishakhapatnam. 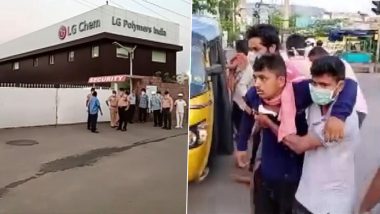 Visakhapatnam, May 7: At least eight persons have died following a gas leak in a chemical factory in RR Venkatapuram village in Andhra Pradesh's Vishakhapatnam during the wee hours on Thursday. The gas leakage was reported at LG Polymers Industry around 3:30 am, which led to panic in surrounding areas. Following the incident, Prime Minister Narendra Modi called a meeting of National Disaster Management Authority officials. Vizag Gas Leak: PM Narendra Modi Says Situation is Being Closely Monitored, Prays For 'Everyone's Safety & Well-Being in Visakhapatnam'.

"There have been seven casualties so far, one of them fell into well while trying to escape. The gas leak occurred at around 3:30 am today morning. The evacuation operation is still underway," Andhra Pradesh Director General of Police, DG Sawang told news agency ANI. "Right now gas has been neutralised. One of the antidotes is drinking a lot of water. An investigation will be carried out to see how this happened," he added. The DGP further said that the chemical unit was shut due to the nationwide lockdown. Visakhapatnam Police Commissioner RK Meena said styrene gas leaked in the chemical factory. Uttar Pradesh: 7 Labourers Killed Due to Gas Leakage in Pipeline in Sitapur.

In the wake of the situation in Visakhapatnam, PM @narendramodi has called for a meeting of the NDMA at 11 AM.

Around 800 persons have been rushed for treatment to various hospitals after complaining of breathing difficulties, and burning sensation in the eyes. According to the Chief Minister's Office, Jagan Mohan Reddy directed the district officials to take every possible step to save lives and bring the situation under control. He will also visit King George Hospital where the affected people are being treated.

PM Modi also spoke to CM Jagan Mohan Reddy and assured all help. Reacting to the gas leak, Union Home Minister Amit Shah tweeted: "The incident in Visakhapatnam is disturbing. Have spoken to the NDMA officials and concerned authorities. We are continuously and closely monitoring the situation. I pray for the well-being of the people of Visakhapatnam."

(The above story first appeared on LatestLY on May 07, 2020 10:42 AM IST. For more news and updates on politics, world, sports, entertainment and lifestyle, log on to our website latestly.com).