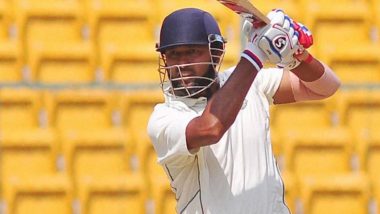 Pace bowler Balwinder Singh Sandhu, who was part of 1983 World Cup-winning Indian team, has also applied for the post. On This Day in IPL 2015: Mumbai Indians Beat Chennai Super Kings by 41 Runs To Win Their Second Title

The MCA further said, "The Cricket Improvement Committee has decided to conduct the interviews in this week."

Jaffer, who represented India in 31 Tests, was head coach of Uttarakhand team before he had to quit due to differences in selection matters with selectors as well as the secretary. He is also batting coach of Punjab Kings team. Bahutule has played two Tests and eight ODIs. He served as coach of Gujarat team prior to this.

Former Mumbai and Railways batsman Amit Pagnis was coach of the Mumbai state team for the curtailed 2020-21 season which saw only limited overs cricket tournaments.

(The above story first appeared on LatestLY on May 25, 2021 01:56 PM IST. For more news and updates on politics, world, sports, entertainment and lifestyle, log on to our website latestly.com).