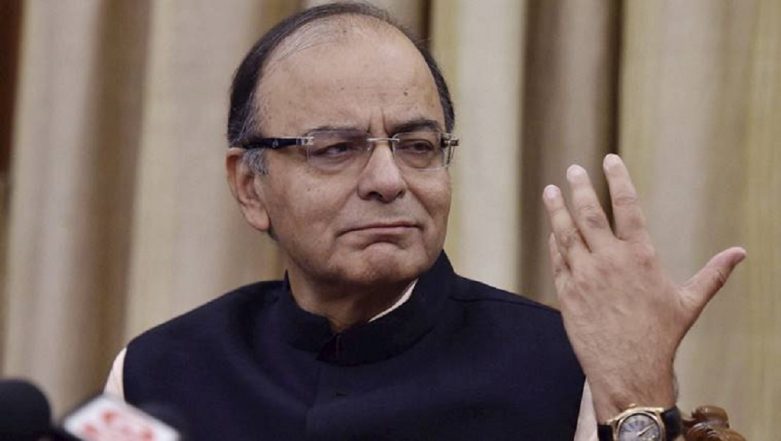 New Delhi, August 5: Soon after Union Home Minister Amit Shah announced the proposal to abrogate Article 370 of the Constitution ending the special status to Jammu and Kashmir (J&K) in the Rajya Sabha, BJP leader Arun Jaitley hailed it as a monumental decision towards national integration. In a series of tweets, Jaitley complimented the Prime Minister and Shah for correcting a "historical blunder" that granted special status to Jammu and Kashmir.

"My compliments to the Prime Minister Shri Narendra Modi ji and the Home Minister Shri Amit Shah for correcting a historical blunder. A historical wrong has been undone today. Article 35A came through the back door without following the procedure under Article 368 of the Constitution of India. It had to go," he tweeted. Article 370 Revoked From Jammu and Kashmir, Amit Shah Makes Historic Announcement Proposal in Parliament While Introducing J&K Reservation Second Amendment Bill.

The decision of the government will help the people of J&K the Most. More investment, more industry, more private educational institutions, more jobs and more revenue.

The former Finance minister insisted that Article 370 was a "temporary provision". "What was a temporary and transient provision cannot be treated as permanent. It had to go. Separate status led to separatism. No dynamic nation can allow this situation to continue," he wrote.

"J&K integration with India took place in October 1947. Article 370 came into force in 1952, Article 35A came in 1954, four and seven years later respectively. How can Articles 370 and 35A be a condition precedent to merger?" he asked on Twitter. Jaitley said, "The decision of the government will help the people of J&K the most. More investment, more industry, more private educational institutions, more jobs and more revenue."

He slammed leaders of the parties from the Valley. "While the Article 370 and Article 35A decision benefits the residents of J&K the most, the Kashmir regional leaders feel that they will not be able to whip up the fake issue of 'sentiment vs. benefit' to the people," he said.

BJP General Secretary Ram Madhav also hailed the Central government's decision. "What a glorious day. Finally the martyrdom of thousands, starting with Dr Shyam Prasad Mukharjee, for compete integration of J&K into the Indian Union is being honoured and the seven-decade old demand of the entire nation being realised in front of our eyes; in our life time. Ever imagined?" Madhav tweeted.