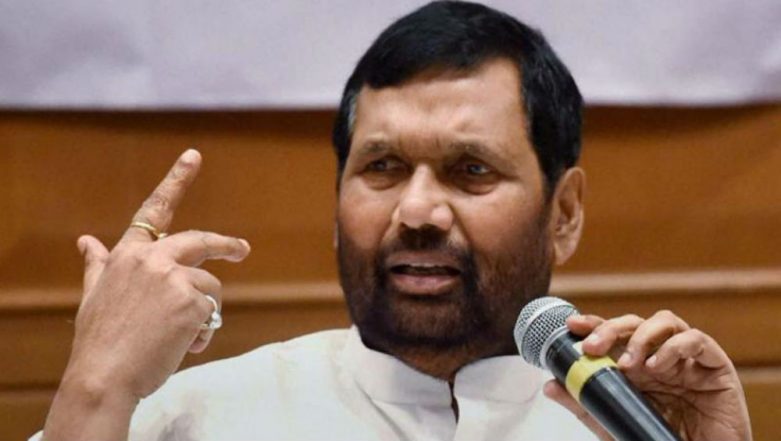 New Delhi, September 8: Pakistan's remarks on Chandrayaan 2 landing came under sharp attack from senior NDA minister Ram Vilas Paswan on Sunday who asserted that the mission has rattled Islamabad. "Biggest achievement of the Modi government is that our neighbour, who is our enemy, has been rattled. Even their ministers are rattled. Let it say anything it wants," Paswan told ANI, in one of the first reactions against any comments by Pakistan.

He added, "Chandrayaan 2 is a success and our scientists have reached close to moon's surface. The Prime Minister is a true leader who stood with its people no matter what. Despite returning from a foreign country, he (Modi) arrived at ISRO to boost the morale of our scientists." Twitterati Slam Pakistan Users For Trolling Chandrayaan-2 Mission.

The development came in the wake of Pakistan's Minister for Science and Technology Fawad Chaudhry's comments where the latter taking a jibe at the Chandrayaan 2, termed the spacecraft -- as a mere "toy". Chaudhry, earlier in the day, tweeted, "India is adding into space debris, earlier "Mission Shakti" failed and now "Chandrayaan", irresponsible attitude of #ModiSarkar from region to space is disastrous for the world, Galaxies and the planet are a delicate business and politicians must not be allowed to play foolish gimmicky."

The comments can also be seen in the light of recent reports that National Security Advisor Ajit Doval had briefed senior government functionaries on the impending cross border movement of terrorists. "The biggest challenge is Pakistan occupied Kashmir (PoK). Had there not been a ceasefire, you won't be hearing about PoK. Pakistan is adamant to count how many it has killed. We will ensure the development and root out terrorism. As the Prime Minister said that our nation is our priority. It's in our national interest. It is related to our border and we are worried about it. I remember the old Kashmir, it was heaven. Today, the Prime Minister and Union Home Minister have promised that they will return that Kashmir. We hope to win the local trust," he added.

With Modi 2.0 government completing 100 days at the Centre, the minister is scheduled to hold sessions in Patna on September 11 as part of the programmes organised on the occasion.

"Modiji has earned fame across the world. Every ministry was given target and they have achieved it. There are ministries who have set target for five years. Look at our foreign policy. The Prime Minister was awarded by a Muslim nation. We believe in sabka saath, sabka vishwas," he added.