As Delhi remained tense over the Citizenship Amendment Act 2019, Chief Minister Arvind Kejriwal called for peace in the national capital. 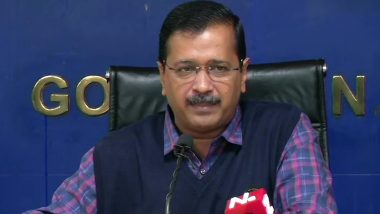 New Delhi, December 18: As Delhi remained tense over the Citizenship Amendment Act 2019, Chief Minister Arvind Kejriwal called for peace in the national capital. Denying involvement of his Aam Aadmi Party (AAP) in violence that broke out in parts of Delhi during anti-CAA protests, Arvind Kejriwal made a veiled attack on the Bharatiya Janata Party (BJP). The AAP chief said that those feared defeat in elections were behind the violence. Citizenship Amendment Act Should Be Taken Back: Delhi CM Arvind Kejriwal.

"An attempt is being made to drag AAP's name in the recent incidents. Why will AAP do this? How will we benefit? We all should maintain peace. Only those who are fearing defeat in the upcoming elections are inciting riots," Kejriwal told a press conference on Wednesday. The national capital witnessed several incidents of violence during protests against the Citizenship Amendment Act 2019 in last three days. Citizenship Amendment Act: Supreme Court Refuses to Stay CAA Implementation, Serves Notice to Centre.

Kejriwal also announced a slew of schemes for lawyers who are registered voters in Delhi. The Delhi government has allocated Rs 50 crores for welfare of lawyers, said Kejriwal. "We have decided to give lawyers who are voters in Delhi, medical insurance up to Rs 5 lakhs, every lawyer will be given life insurance up to Rs 10 lakhs. E-libraries and creches will be started in all court premises for the lawyers, for their convenience," he elaborated.

Questioning rationale behind the CAA, Kejriwal added: "Those who come from outside the country will be provided documents by our government but India's citizens who do not have documents will have to go away from the country? Why was this kind of law needed? There are so many other issues that need attention."

(The above story first appeared on LatestLY on Dec 18, 2019 01:44 PM IST. For more news and updates on politics, world, sports, entertainment and lifestyle, log on to our website latestly.com).