In the last assembly elections held in Delhi, the Arvind Kejriwal-led AAP was voted to power with a historic mandate. The party had ended up winning 67 out of the 70 seats, leaving only 3 for the BJP. The Congress, which had ruled Delhi for 15 years between 1998 to 2013, ended up drawing a blank. 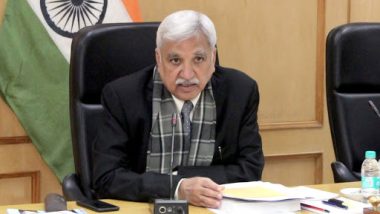 New Delhi, January 6: The Election Commission of India (ECI) on Monday announced the dates for Delhi assembly elections 2020. The polls in the national capital will be held in a single phase on February 8, announced Chief Election Commissioner Sunil Arora. The counting of votes is scheduled on February 11, the CEC said, adding that the final results will be declared on the same day. Here Are Answers to Most FAQs on Delhi Assembly Elections 2020.

For the smooth conduct of legislative assembly polls in the national capital territory, a total of 13,750 polling stations have been earmarked, CEC Arora said. The number of voters, he said, number over 1.46 crore. "Total electors in NCT of Delhi are 1,46,92,136; Polling to be held at 13,750 polling stations," he said.

The Model Code of Conduct (MCC) has come into force in Delhi with immediate effect, CEC Arora announced, adding that the Commission would ensure that liquor and money power is not used to sway the mood of electorate.

In Delhi, a total of 70 legislative assembly seats will be contested. The electoral battle is largely triangular, featuring the state-ruling Aam Aadmi Party (AAP) against the Centre-ruling Bharatiya Janata Party (BJP), and the Congress probably entering the polling fray as the third front. The election comes days after the BJP suffered a rout in the state of Jharkhand. Delhi Assembly Elections 2020 FAQs: Who is The Current Chief Minister of Delhi? How Many Vidhan Sabha Constituencies Are There in National Capital?

The term of current Delhi assembly ends on February 22, 2020 -- making it imperative for the new legislature to takeover before the said date. In case of  a hung verdict by the Delhi electorate, and no post-poll alliance formed by February 22, the Lieutenant Governor would be compelled to declare President's rule.

In the last assembly elections held in Delhi, the Arvind Kejriwal-led AAP was voted to power with a historic mandate. The party had ended up winning 67 out of the 70 seats, leaving only 3 for the BJP. The Congress, which had ruled Delhi for 15 years between 1998 to 2013, ended up drawing a blank.

The last five years have pitted the Kejriwal-led state government in a bitter battle against the Prime Minister Narendra Modi-led Centre. The Delhi Chief Minister, since the start of his tenure, has blamed the central government of "laying obstacles" in his mission to provide optimum governance to the people.

The BJP, which has already launched a high-voltage campaign to wrest Delhi from the AAP, is banking on PM Modi's appeal to woo the voters. The party's campaign was launched on December 22 by Modi from the Ramlila Maidan. Kejriwal, meanwhile, has launched an intensive door-to-door campaign to take his message to the voters. The AAP is relying on the water and electricity subsidies it has granted to the people, along with the reforms made in education and healthcare sector, to retain power in Delhi.

(The above story first appeared on LatestLY on Jan 06, 2020 03:52 PM IST. For more news and updates on politics, world, sports, entertainment and lifestyle, log on to our website latestly.com).