Amid ongoing protests against the Centre's farm laws, Prime Minister Narendra Modi on Friday dismissed the allegation that "reforms" mentioned in the legislation were brought in with extensive discussions. 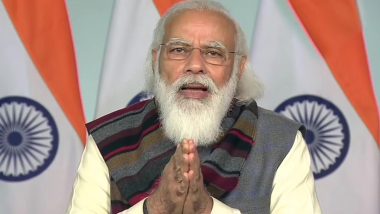 "Farm laws have not been introduced overnight. Over the last 20-30 years, central government and state governments had detailed discussions on these reforms. Agriculture experts, economists and progressive farmers have been demanding these reforms," PM Modi said. He went on to add that reforms in the farm laws had found mention in manifestoes of opposition parties. Amid Farmers' Protest, BJP to Launch Campaign to Promote Farm Laws, Cabinet Ministers Will Reach Out to People.

"I request all political parties with folded hands, please keep all the credit. I am giving credit to all your old election manifestos. I just want ease in the life of farmers. I want their progress and want modernity in agriculture," the Prime Minister said. He again accused opposition parties of misguiding farmers on farm laws, reassuring farmers that minimum support price will continue.

"Political parties should stop misguiding farmers. It's been 6-7 months since farm laws were implemented. But now suddenly, games are being played to plough one's own political land through a web of lies," he said. "If we had to remove MSP, why would we implement the Swaminathan Commission report? Our government is serious about the MSP, that's why we declare it before sowing season every year," he said.

If we'd to remove MSP, why would we implement Swaminathan Commission report? Our govt is serious about the MSP, that's why we declare it before sowing season every year. This makes it easy for farmers to make calculations: PM Modi virtually addressing Kisan Kalyan event in Raisen https://t.co/Y6s3GG1f3H pic.twitter.com/kiniQGKtVS

The farmers' protest in and around Delhi have entered the 23rd day on Friday with their unions chalking out strategies to intensify the protest. The protesting farmers want the government to withdraw The Farmers Produce Trade and Commerce (Promotion and Facilitation) Act, 2020; The Farmers (Empowerment and Protection) Agreement of Price Assurance and Farm Services Act, 2020; and The Essential Commodities (Amendment) Act, 2020.

The government, on the other hand, is saying that it is ready to amend these laws to address farmers' concerns. It has also said that it will give in writing that MSP won't be suspended.

(The above story first appeared on LatestLY on Dec 18, 2020 02:43 PM IST. For more news and updates on politics, world, sports, entertainment and lifestyle, log on to our website latestly.com).