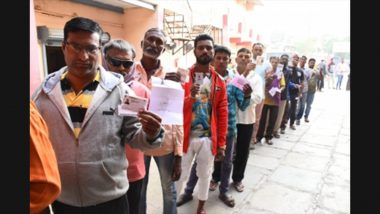 Gandhinagar, Dec 2: A voter turnout of 60.48 per cent was recorded in the first phase of the Gujarat assembly elections which covered 89 constituencies of Saurashtra-Kutch and south Gujarat region. This was 8 per cent less compared to the 2017 assembly elections.

Final figures are likely to be declared by the Election Commission on Friday. Gujarat Assembly Elections 2022 Phase 1 Polling: People Feel Rivaba Would Stand Up to Their Expectations, Says Ravindra Jadeja in Jamnagar.

In urban constituencies like Karanj, voting was just 49.53 per cent, Choryasi (54.40 per cent), Surat North (55.32 per cent), Udhana (55.69 per cent). Whereas in rural areas, turnout in Mahuva of Bhavnagar district was 60.45 per cent, in Amreli's Rajula constituency it was 63.30 per cent, Dhrangadhra of Surendranagar district it was 66.77 per cent. Gujarat Assembly Elections 2022: PM Narendra Modi Urges People 'Don’t Repeat Mistake Committed Post-Independence, Bring BJP To Power'.

Compared with previous elections' turnout, in the Mandvi seat of Kutch district voting percentage has dropped 19 per cent, in Surat's Mangrol seat it has fallen by 17 per cent.

People at certain places also boycotted voting. In Samot village of Narmada district, 1000 voters were listed, but not single voter turned up to vote, in Gir Somnath district's Pipalva village out of total 1700 voters, till 4 p.m., only 40 voters reached polling booth to exercise their franchise.

(The above story first appeared on LatestLY on Dec 02, 2022 09:10 AM IST. For more news and updates on politics, world, sports, entertainment and lifestyle, log on to our website latestly.com).