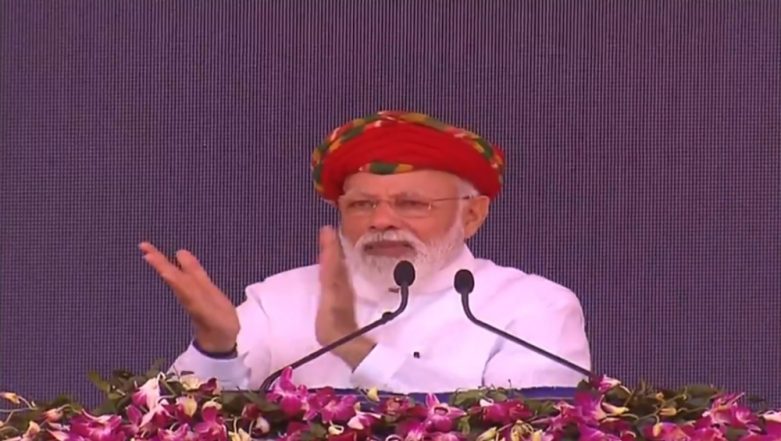 Tiruchirappalli, March 23: After taking their protests to the National capital to highlight their demands, Tamil Nadu farmers are gearing up for an electoral battle and will file over 100 nominations from the Varanasi Lok Sabha constituency from where Prime Minister Narendra Modi is contesting.

Tamil Nadu farmers leader P Ayyakannu said Saturday that 111 farmers from the State will contest against Modi from Varanasi. Ayyakannu, who is also president of the National South Indian Rivers Inter-Linking Farmers Association, said the decision to contest the polls from Uttar Pradesh was to urge the BJP to include in their manifesto that their demands, including "profitable prices for farm produce," would be fulfilled. Narendra Modi is Chowkidar of Nirav Modi, Vijay Mallya and Mehul Choksi, Says Rahul Gandhi at Purnea Rally.

Speaking to PTI, the farmers leader, who spearheaded agitations in Delhi in 2017 for over 100 days, said the "moment they assure in their manifesto that our demands will be fulfilled, we will drop our decision to contest against Modi."

In the event of that not happening, he said they would go ahead and contest against Modi. The decision to contest polls has the support of farmers everywhere and the All India Kisan Sangharsh Coordination Committee, Ayyakannu said.

Asked why they were raising the demand with BJP alone and not other parties like the Congress to include it in their manifestos, he said the BJP was still the ruling party and Modi the Prime Minister.

Parties like the DMK and the Amma Makkal Munnetra Kazhagam have assured full loan waiver, which is also one of the farmers' demands, in their manifestos, he said.

"We are not against the BJP or our PM Modi. Before assuming power, Modi ji promised fulfilling our demands and assured to double our income.

Even today he is our Prime Minister and the BJP is the ruling party and that is why we are making this demand to them."

The leader wondered as to what stopped the saffron party from giving an assurance.

Already, he said, he has booked train tickets for 300 farmers to go to Varanasi.

Farmers from districts, including Tiruvannamalai and Tiruchirappalli, will reach Varanasi, he said.

The BJP-led government at the Centre had promised to fulfill their demands including profitable prices for farm produce, loan waiver from all banks including nationalised, and cooperative and Rs 5,000 pension for farmers over 60, Ayyakannu said.

"At the least, let the lone BJP MP from Tamil Nadu Pon Radhakrishnan commit that our promises will be honoured in the manifesto, we may think about reconsidering our decision," he said.

In November 2018, farmers led by Ayyakannu had gone to Delhi with two "skulls," to take part in a kisan rally, saying it belonged to their colleagues who had allegedly committed suicide over debt.