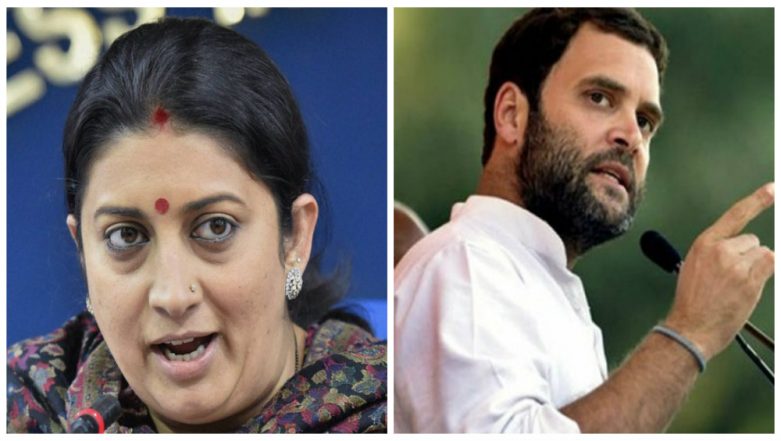 New Delhi, May 4: Campaigning for phase 5 of the Lok sabha elections 2019 has come to a halt on 5pm today, as the Model Code of Conduct bars any form of electioneering during the 48 hour period preceding the end of voting period. A total of 51 seats, spread across 6 states, are set to go polls on Monday. Lok Sabha Elections 2019 Schedule: Voting In 7 Phases From April 11 to May 19, Counting And Results On May 23; Check All Dates For General Elections.

Campaigning ended Saturday evening for elections to 51 Lok Sabha seats in six northern and eastern states besides the Bundelkhand region of Madhya Pradesh in the fifth phase on May 6 with Union ministers Rajnath Singh, Rajyavardhan Rathore, Smriti Irani, Jayant Sinha and Arjun Ram Meghwal and top Congress leaders Sonia and Rahul Gandhi and among those in the fray. Lok Sabha Elections 2019 Phase V: List of States And Constituencies Voting On May 6.

Polling will be held on Monday in 14 seats in Uttar Pradesh, 12 in Rajasthan, seven seats each in West Bengal and Madhya Pradesh, five in Bihar, four in Jharkhand and two seats in Jammu and Kashmir. Prime Minister Narendra Modi led the BJP's campaigning, holding several rallies. BJP chief Amit Shah, Congress president Rahul Gandhi and a host of Union ministers among others also canvassed for their party candidates in the past few days, undertaking whirlwind tours of constituencies.

In West Bengal, the BJP candidate from Bongaon (SC) seat, Shantanu Thakur, was injured in a road accident. A police van lost control and hit Thakur's vehicle at the front when he was heading towards Kalyani to attend an election rally on the last day of campaigning, police said.

Thakur, his driver and two others who were in the vehicle, were injured, they said. Campaigning in the state during the past couple of days was marred by panic over Cyclone Fani, which caused large scale destruction in neighbouring Odisha, with political parties cancelling their election meetings.

Seats in which elections will be held on Monday are Bongaon(SC), Barrackpur, Howrah, Uluberia, Serampore, Hooghly and Arambagh (SC) where an electorate of 1,16,91,889 will decide the fate of 83 candidates, the Election Commission said. In Bihar, Modi canvassed in favour of the BJP candidates as also nominees fielded by alliance partners JD(U) and LJP.

He described the ruling NDA in the state as a cohesive three-in-one entity and the opposition weak, loosely knit and helpless against menaces of black money, corruption and threats to national security. BJP MPs Ajay Nishad and Rajiv Pratap Rudy are seeking re-election from their respective seats of Muzaffarpur and Saran respectively in Bihar.

LJP chief Ram Vilas Paswan, who has announced that he would no longer contest direct elections, has fielded his younger brother and state minister Pashupati Kumar Paras from his pocket borough of Hajipur. A high-decibel campaign for seven Lok Sabha constituencies in the Bundelkhand region of Madhya Pradesh also ended Saturday.

Polling for Tikamgarh, Damoh, Khajuraho, Satna, Rewa, Hoshangabad and Betul seats, all held by the BJP currently, will take place Monday. This will be the second phase of polling in Madhya Pradesh, the first phase having been held on April 29.

Union minister Virendra Kumar Khatik is the BJP candidate from Tikamgarh while former Union minister and sitting MP Prahlad Patel is the party's Damoh candidate. Modi Saturday addressing rallies in Pratapgarh and Basti in Uttar Pradesh and said the SP-BSP alliance partners will be at each other's throats when the results are out on May 23. He also accused the Samajwadi Party of going soft on the Congress, saying the two parties are playing a "big game" against Bahujan Samaj Party chief Mayawati.

The BJP had bagged 12 of the 14 seats in 2014 with Sonia Gandhi winning in Rae Bareli and Rahul in Amethi. The other UP seats going to the polls on May 6 are Dhaurahra, Sitapur, Mohanlalganj (SC), Lucknow, Banda, Fatehpur, Kaushambi (SC), Barabanki (SC), Faizabad, Bahraich (SC), Kaiserganj and Gonda.

Union Home Minister Singh is seeking re-election from Lucknow, while his colleague at the Centre Irani is again taking on Rahul in Amethi. Rajasthan also saw hectic campaigning by the BJP and the Congress over the past week for the 12 seats.

Union ministers Rathore (Jaipur rural) and Meghwal (Bikaner), Congress MLA and Olympian Krishna Poonia (Jaipur rural), Bhanwar Jitendra Singh (Alwar) are some of the contestants in this last phase of polling in the state. In Jharkhand, among those in the fray is Union minister Jayant Sinha.

In Jammu and Kashmir, Pulwama and Shopian districts are going to polls on May 6 in the third leg of polling in the Anantnag Lok Sabha constituency. Polling will also be held in Ladakh on Monday.