Manoj Tiwari Defends Wearing Army Uniform at Bike Rally, Says ‘I have 10 Shirts Like That’ 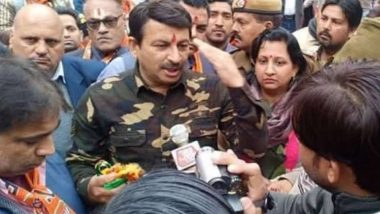 New Delhi, March 4: Being criticised for wearing a shirt – resembled like the Indian Army uniform – during a bike rally, BJP’s Delhi unit president Manoj Tiwari on Monday said it was ‘not a uniform but a shirt’. Adding more he stated that he has 10 such similar pieces of clothing which he wears every morning.

Addressing the reporters in the national capital, Tiwari said, as quoted by the Indian Express, “It was a shirt. I have 10 shirts like that. I go to jogging wearing it every morning. Which shop or mall does not sell such shirts.” Manoj Tiwari Wears Armed Forces Uniform at BJP’s Bike Rally in Delhi, Draws Flak From Opposition.

Tiwari even defended himself by stating that whenever he wears an ‘army-coloured’ shirt, he feels more proud. He said, “For me, wearing army colours is a matter of pride. Whenever I am happy or I have to felicitate a brave-heart, I put it on.” Adding on, he claimed that in his next rally, along with him, participants would also be wearing the uniform.

Responding back, Tiwari took pot-shot on Sharma by stating that those supporting ‘Tukde-Tukde gang’ are giving him a lecture on penal codes. The Delhi BJP chief said, “Those who side with Tukde-Tukde gang, are saying that I have insulted armed forces by wearing the shirt. Such people lower the morale of our soldiers through their talks.”

(The above story first appeared on LatestLY on Mar 04, 2019 11:59 PM IST. For more news and updates on politics, world, sports, entertainment and lifestyle, log on to our website latestly.com).