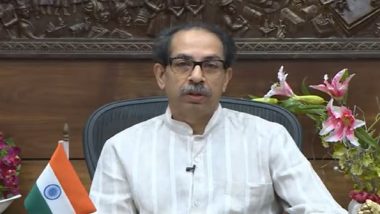 New Delhi, June 16: A state-wide protest for the implementation of reservation quota for the Maratha community was launched from Kolhapur, Maharashtra on Wednesday. Leaders from across the state joined the silent protest led by the opposition Bhartiya Janata Party, at the resting place of Chhatrapati Shivaji.

Earlier in May 2021, Supreme Court had rejected the Maratha reservation law for jobs and admission as 'unconstitutional'. SC observed that the said law violated the principle of equity as given in Article 16 of the constitution. The bench also noted that there was no need to exceed the 50 percent reservation cap.  Maratha Reservation: Supreme Court Quashes Law Granting Reservation to Maratha Community in Education, Jobs Exceeding 50%.

He said similar protests like these will be held in other cities like Nashik, Mumbai, Pune, Aurangabad, Amravati, Raigad, etc if their demands are not met.

The Maharashtra Government led by Uddhav Thackeray has invited protesting MP's for talks with the cabinet on Thursday. Sambhajiraje Chhatrapati has demanded both review and curative petitions on Supreme Court's order quashing the Maratha reservation. Supreme Court had earlier quashed 12% and 13% quota for Marathas On education and government jobs, under the Socially and Educationally Backward Classes Act 2018.

(The above story first appeared on LatestLY on Jun 16, 2021 04:27 PM IST. For more news and updates on politics, world, sports, entertainment and lifestyle, log on to our website latestly.com).