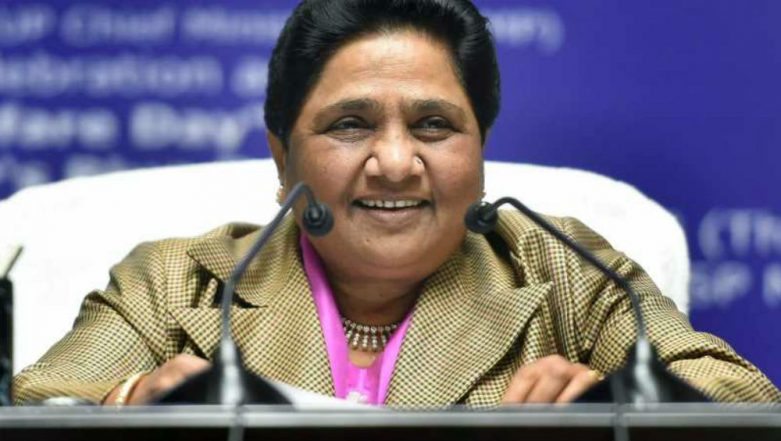 Lucknow, February 14: Bahujan Samaj Party (BSP) chief Mayawati on Thursday lashed out at Congress government in Madhya Pradesh for booking three men under the National Security Act (NSA) for cow slaughter. Mayawati compared the MP government to the Bharatiya Janata Party (BJP) government in Uttar Pradesh. The BSP said that the Congress government acted on the lines of the previous BJP government in MP and acted against the Muslims, just like the BJP government in Uttar Pradesh which booked 14 Aligarh Muslim University students under sedition law. She further added that there was no difference between the two parties. Madhya Pradesh: Three Held for Cow Slaughter Likely to Transfer Rewa Jail.

Mayawati's comment comes at a time when opposition parties are trying to up against the Narendra Modi government in the upcoming Lok Sabha elections. The BSP is contesting the parliamentary elections in an alliance with Samajwadi Party in Uttar Pradesh. Last month, both the parties announced an alliance. The SP-BSP alliance in UP is consenting on 78 seats out of 80. Meanwhile, the alliance will not put up candidates from Rae Bareilly and Amethi as these seats are left for UPA chairperson Sonia Gandhi and Congress chief Rahul Gandhi. AMU Clashes a Matter of Internal Dispute, Says Police.