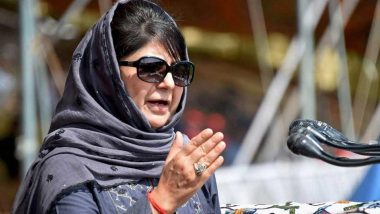 Srinagar, October 26: Three senior People's Democratic Party (PDP) leaders resigned from the party. The leaders who resigned from the PDP are TS Bajwa, Ved Mahajan and Hussain A Waffa. The leaders claimed that Mehbooba Mufti's remarks had "hurt patriotic sentiments". The senior leaders sent their resignation letter to Mufti.

In the letter, the PDP leaders wrote, "They were feeling quite uncomfortable over some of her actions and undesirable utterances especially which hurt patriotic sentiments." Notably, on Friday, former Chief Minister and Peoples Democratic Party (PDP) President Mehbooba Mufti lashed out at the Centre and said that she won't raise any other flag till the flag of the erstwhile state of Jammu and Kashmir was restored.

In a letter to party pres Mehbooba Mufti (in file pic) they state that they are 'feeling quite uncomfortable over some of her actions and undesirable utterances specially which hurt patriotic sentiments'. pic.twitter.com/EsjoZn5geq

On October 24, National Conference president Farooq Abdullah was appointed as the president of the recently floated People's Alliance for Gupkar Declaration (PAGD), a conglomerate of mainstream Kashmir parties for the reversal of constitutional changes made in Jammu and Kashmir on August 5 last year. Mufti was appointed as vice president of PAGD. She was released earlier this month after 14 months in detention under the Public Safety Act.

(The above story first appeared on LatestLY on Oct 26, 2020 05:57 PM IST. For more news and updates on politics, world, sports, entertainment and lifestyle, log on to our website latestly.com).