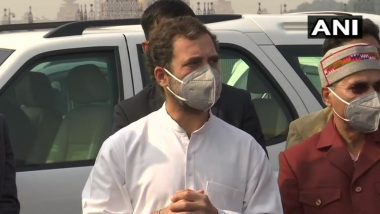 Sunil Jakhar said after the meet, "Hope that the current situation will be resolved and some wrong people are advising the chief minister over the decision on jobs to kin of MLAs."   Punjab Congress Infighting: All You Need To Know

He said the issue of Navjot Singh Sidhu is under discussion by the party leadership. While another bete noire of Punjab CM, Pratap Singh Bajwa also met Rahul Gandhi and said that he discussed the ground reality and current political situation in the state.

He asserted, "the party high-command will take decision over the chief ministerial candidate for next assembly elections."

Former Congress president Rahul Gandhi has stepped in to defuse the tension in the state unit as he met several leaders including Pargat Singh.

Some MLAs who met Rahul Gandhi said that they have raised issues regarding the state. Pargat Singh, who is among those MLAs, critical of the chief minister, said: "If CM is ready to address the issues raised by me, then the matter is resolved."

Meanwhile, Amarinder Singh expressed his displeasure during the meeting on Tuesday with the party panel for being targeted and said that undue pressure is being created by a few individuals, sources said.

However, senior party leader Mallikarjun Kharge, who heads the three-member panel, which has got a larger mandate for poll preparation apart from resolving factionalism in the state party unit, said: "Everybody has said that they will fight the polls together and the party is united under the leadership of Sonia Gandhi and Rahul Gandhi."

Sources say the panel discussed the political situation in the state and also issues related to Navjot Singh Sidhu and a possible way out to resolve the issue.

While Sidhu is not relenting in his attack on the chief minister, he has insisted on an early resolution of issues. State in-charge Harish Rawat has said that the matter is with Sonia Gandhi and refused to comment on statements made by Sidhu.

(The above story first appeared on LatestLY on Jun 23, 2021 03:01 PM IST. For more news and updates on politics, world, sports, entertainment and lifestyle, log on to our website latestly.com).