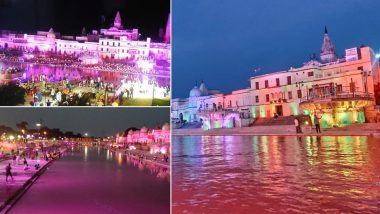 Ayodhya, August 5: The temple town of Ayodhya was lit up with earthen lamps all around as the city awaits a historic moment today. Prime Minister Narendra Modi, whose ruling Bharatiya Janata Party (BJP) had promised the construction of a grand Ram Mandir in Ayodhya, will lay the foundation stone of the temple at the Bhumi Pujan ceremony.

Modi is scheduled to depart from Delhi to Lucknow at 9:35 am. In the next one hour, he would be arriving in Lucknow, from where a helicopter will take him to Ayodhya. He is scheduled to reach the town of Ram Janmabhoomi at 11:30 am and join the Bhumi Pujan event. Ram Temple Bhoomi Pujan in Ayodhya: Here is PM Modi's Full Itinerary For The Ram Mandir Event on August 5.

The Prime Minister would be laying the foundation stone for the temple following the puja that will begin at 12:30 pm. The main worship of Lord Ram's idol will begin at 12:45 pm, which is considered as the auspicious time when the deity was born.

Modi would be laying the foundation stone with a 40-kg silver brick. The moment is expected to symbolise the struggle led by his party - the ruling BJP - for nearly four decades to build a Ram Mandir on the site where the Babri Masjid once stood. LK Advani on Ram Mandir Bhumi Pujan: 'Historical, Emotional Day...Dream Getting Fulfilled'

The BJP has called it a moment which should make "Indians across the world proud". The party called it a landmark moment in the history of independent India, which would propagate the ideals and vision of Lord Ram.

Party patriarch LK  Advani, who led the Ram Janmabhoomi movement which brought the Ayodhya dispute to the national political centrestage, would not be attending the bhumi pujan due to the risk posed to his health amid the COVID-19 pandemic.

In a statement issued on eve of the foundation stone-laying ceremony, Advani called for inclusiveness. ""It is also my belief that Ram Mandir will represent India as a strong, prosperous, peaceful and harmonious nation with justice for all and exclusion of none so that we can truly usher in Ram Rajya, the epitome of good governance," the BJP margdarshak mandal said, in his concluding remarks," the 92-year-old said.

A before the landmark Bhumi Pujan, earthen lamps and lights projecting saffron and purple shades were beaming in several parts of Ayodhya, including the holy Saryu Ghati. The town is celebrating "Deepotsav", as announced by Chief Minister Yogi Adityanath.

Apart from the ruling BJP, the main Opposition party Congress also welcomed the temple construction. A statement issued by Congress general secretary Priyanka Gandhi on Tuesday stated that the temple would fulfil the aspirations of Hindus and serve as a symbol of national unity and cultural harmony.

(The above story first appeared on LatestLY on Aug 05, 2020 12:02 AM IST. For more news and updates on politics, world, sports, entertainment and lifestyle, log on to our website latestly.com).