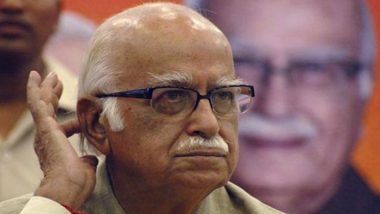 New Delhi, August 4: Bharatiya Janata Party (BJP) patriarch LK Advani, who led the Ram Janmabhoomi movement from 1989 to 1992, issued his first reaction to the Ram Mandir Bhumi Pujan event that will be held in Ayodhya tomorrow. Advani called it a historical day, which would fulfill the long-held dream of countless devotees of Lord Ram.

"I feel humbled that during Ram Janmabhoomi movement, destiny made me perform a pivotal duty in the form of Ram Rath Yatra from Somnath to Ayodhya in 1990 which helped galvanise aspirations, energies and passions of its countless participants," said the statement issued by Advani. Ram Mandir Bhumi Pujan: Uma Bharti Reaches Ayodhya Day Before PM Modi's Arrival, Offers Prayers at Saryu Ghat.

"Sometimes significant dreams take a long time to fruition, but when finally realised, wait becomes worthwhile. One such dream, close to my heart is getting fulfilled. PM is laying foundation of Ram Mandir. It's a historic and emotional day not only for me but all Indians," he added.

"Shri Ram occupies an esteemed place in India’s cultural and civilizational heritage and is an embodiment of grace, dignity and decorum. It is my belief that this temple will inspire all Indians to imbibe his virtues," Advani further stated.

"It is also my belief that Ram Mandir will represent India as a strong, prosperous, peaceful and harmonious nation with justice for all and exclusion of none so that we can truly usher in Ram Rajya, the epitome of good governance," the BJP margdarshak mandal said, in his concluding remarks.

It is also my belief that Ram Mandir will represent India as a strong, prosperous, peaceful and harmonious nation with justice for all and exclusion of none so that we can truly usher in Ram Rajya, the epitome of good governance: Veteran BJP leader Lal Krishna Advani. #RamMandir pic.twitter.com/92BAOx4Bzi

Advani, along with BJP veterans Murli Manohar Joshi and late former Prime Minister Atal Bihari Vajpayee played a pivotal role in bringing the Babri Masjid-Ram Mandir case to the national centrestage. The 93-year-old is also facing a trial in the Babri Masjid demolition case, as a frenzied mob of kar sevaks had razed down the mosque that stood on the disputed site on December 6, 1992.

Advani, who had also later served as the Union Home Minister, denied the role of BJP leadership in the demolition of mosque. He claimed that his Rath Yatra was only aimed at raising awareness to reclaim the site where Lord Ram is believed to be born, rather than destroying the place of worship of any other religious community.

(The above story first appeared on LatestLY on Aug 04, 2020 09:07 PM IST. For more news and updates on politics, world, sports, entertainment and lifestyle, log on to our website latestly.com).