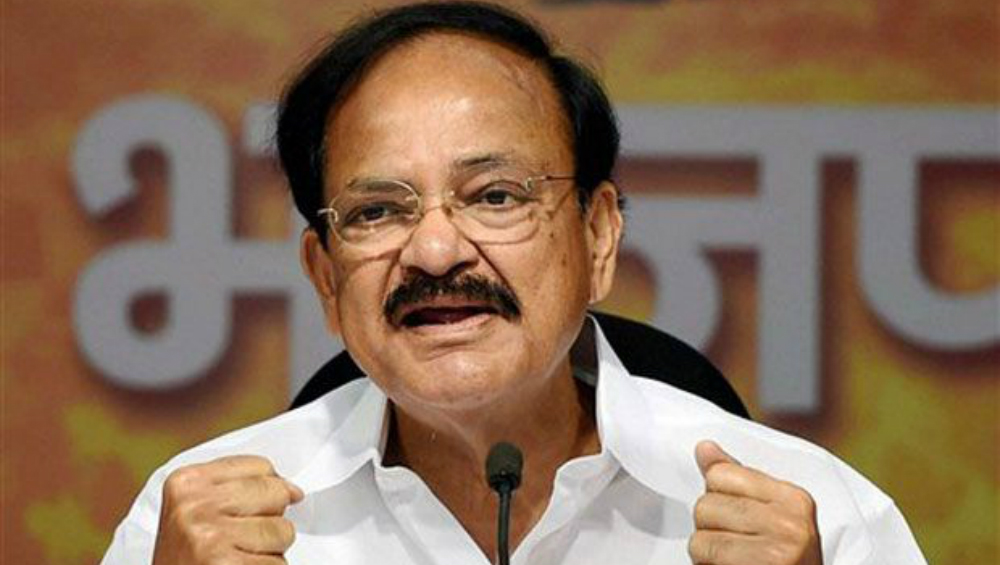 Chennai, January 12: Vice President M Venkaiah Naidu on Sunday said respect for all religions was inherent "in the Indian blood" and asserted secularism does not mean 'insult' or appeasement of one particular faith. For a long time, India has sheltered persecuted persons and given refuge to many, Naidu said at an event here to mark the centenary of Sri Ramakrishna Vijayam, a Tamil monthly of Sri Ramakrishna Math.

Speaking on the occasion coinciding with the birth anniversary of Swami Vivekananda, Naidu said people should forever remember him and propagate his teachings and preachings "which are eternal for the betterment of mankind." Vice President M Venkaiah Naidu Complements RSTV for Crossing 40 Lakh Subscriber Mark on YouTube.

Hailing the guru as a "great saint, teacher and social reformer," he said Swami Vivekananda played a major role in introducing Hinduism to the West. "He was a social reformer and was against religious dogmas and believed in the uplift of humanity irrespective of caste or creed and emphasised that spiritualism is important for the survival of mankind," Naidu said.

"Swami Vivekananda stressed on the importance of spirituality. India, in a way is the spiritual guru for the entire world. People look to India for solace, guidance and spiritualism," he added. Quoting from Vivekananda, he said the Swamiji was proud that he belonged to a religion "that has taught the world both tolerance and universal acceptance."

"...the only religion which says all religions are true. That is the greatness, that is the beauty of this religion (Hinduism)," he said. Swami Vivekananda also said he belonged to a nation which has sheltered the persecuted and the refugees of all nations of the earth, Naidu said. "Now also we are ready to accept those who are persecuted though some people are trying to make it controversial and all," he said in an apparent reference to the opposition to the NDA government's controversial Citizenship Amendment Act.

"That is our culture, our heritage. This is what our forefathers have told us," the Vice President added. The CAA envisages providing Indian citizenship to persecuted minorities from Pakistan, Bangladesh and Afghanistan. Today there was more than ever a need to bring down the walls that create differences among the people and "we follow sarvadharma samabhavana," or respect for all religions, he said.

"It is there in our Indian blood. People now talk about secularism, constitution. Constitution came later, but the Indian blood- sarvadharma samabhavana-- respect for all religions (existed already)," Naidu said. From time immemorial, people have come from outside and have been given shelter, he said, adding different religions also came to India and were respected "because we believe every religion is important and sarvadharma samabhavana is the essence of our civilisation."

Without naming anyone, he said some people had some kind of an "allergy" towards the word Hindu. "There are some people in this country who have some allergy towards this word called Hindu. We can't help them and they have got every right to have that view. But they are not right," he said.

On the International Yoga Day, he said Prime Minister Narendra Modi had made efforts to take it to the UN following which it was now being practiced in many countries. In a possible reference to critics of the Prime Minister, he said "yoga is for your body, not because of Modi," and urged one and all to do it for one's own good.

Earlier, Naidu played Badminton with his old friends. "Had a refreshing start to start my day. Played a wonderful Badminton game with my old friends in Chennai amid beautiful weather," the official twitter account of Naidu said in a tweet and shared pictures of Vice President playing the game.