Shayara Bano Appointed Vice-Chair in Women's Commission and Gets Ministerial Rank in BJP's Uttrakhand Government; Here is All You Need to Know about the Anti-Triple Talaq Activist

Shayara Bano, the triple talaq crusader, who joined BJP on October 10 has been appointed as the Vice-Chairperson in the State Women Commission with Minister of State (MoS), Uttrakhand. She was the first to challenge the constitutional validity of the practice of triple talaq in the Supreme Court in 2016. 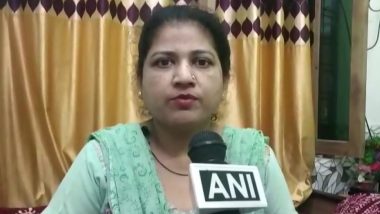 Dheradun, October 21: Shayara Bano, the triple talaq crusader, who joined BJP on October 10, has been appointed as the  Vice-Chairperson in the State Women Commission and has also been made Minister of State (MoS) in Uttrakhand government. On joining BJP, she said that she was influenced by the party's principles. She was the first to challenge the constitutional validity of the practice of triple talaq in the Supreme Court in 2016. Triple Talaq Bill Passed: India Joins Pakistan, Saudi Arabia in Outlawing Practice; Check List of Countries Where Instant Divorce is Banned.

Shayara Bano, a resident of Kashipur, Uttrakhand, was married to an Allahabad-based property dealer Rizwan Ahmed in April 2001. In 15 years of her marriage, she claimed, that she was subjected to domestic violence and physical torture by husband and in-laws. She alleged that she was often beaten and kept hungry in a closed room for days. She had accused her former husband and in-laws of demanding additional dowry and a car from her parents.

In October 2015, while Bano was at her father's residence in Kashipura, recovering from an illness, her husband divorced her by sending a  speed post that contained a divorce note. Ahmed kept the custody of their children. That was a turning point in her life. The following year, Bano filed a petition in the Supreme Court challenging the constitutionality of the triple-talaq custom. Triple Talaq Bill Challenged in Supreme Court, Jamiat Ulama-i-Hind Moves Petition Seeking Stay on Law.

She challenged the "patriarchal nature" of the Shariat Law, appealed to the court to declare the custom talaq-e-biddat void, and argued that it undermines the constitutional rights of Muslim women. She won the support of other women from her community but was called out by many as a publicist for BJP before the Uttar Pradesh Assembly Elections 2017.

She was ridiculed and her efforts were called anti-Islamic, but Bano didn't give up and stood fighting for what she believed was justice. “It was a social fight, not a political one. It should not be made into a political agenda,” Shayara Bano told The Hindu in an interview.  Her struggle was finally over in August 2017, when the Supreme Court declared triple-talaq as unconstitutional.

(The above story first appeared on LatestLY on Oct 21, 2020 04:20 PM IST. For more news and updates on politics, world, sports, entertainment and lifestyle, log on to our website latestly.com).