Senior AIADMK leader and former minister, Natham R Viswanathan has said that the party's ex- interim general secretary V.K. Sasikala was a burden on the party. 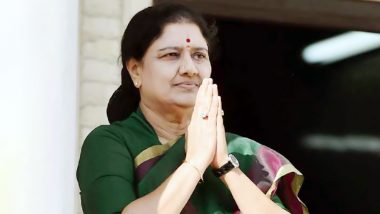 A statement released on Sunday after a resolution against Sasikala was adopted at the Dindugal district committee meeting of the AIADMK, said that neither the party cadres nor the people of Tamil Nadu wanted her back in the party.  Tamil Nadu Assembly Elections 2021: VK Sasikala, Expelled AIADMK Leader, Performs Puja at Temple in Rameswaram

The Dindigul meeting also decided to expel those cadres or middle level functionaries who have any truck with Sasikala. Rebuking the former interim general secretary, he said Sasikala is telling the cadres that a mother (Sasikala) cannot be separated from the child (Cadre); in fact she is not a mother, she is something else.

The AIADMK leadership has passed similar resolutions in all districts against Sasikala but the stoic silence of O Panneerselvam and his home district unit of Theni not passing a resolution has raised eyebrows. Both Sasikala and Panneerselvam are from the powerful Thevar community which has a sizeable presence in South Tamil Nadu.

However, Sasikala again reached out to party cadres on Sunday and said, "Amma (Jayalalithaa) also faced a similar situation after the death of MGR and she was rebuked and ridiculed by the party leaders but later things turned around and she took control of the party and a similar situation will happen here also."

She said that the senior leaders of the party are fearing her entry into the party as they know that the cadres and lower level leaders are in favour of her entry.

AIADMK Chief Whip, S. P. Velumani conducted a meeting of his Coimbatore district unit on Sunday and passed resolutions of her sparking casteist feelings among the party cadres. The party resolution said, "The AIADMK will not surrender to the whims and fancies of one family and that the party has no connection with Sasikala or her extended family."

AIADMK politics of Tamil Nadu is in for a churn and Sasikala is allegedly trying to make use of the opportunity for an entry into the party and later take control of it with the support of her nephew TTV Dhinakaran who is presently heading the Amma Makkal Munnetra Kazhagam (AMMK).

(The above story first appeared on LatestLY on Jun 21, 2021 05:01 PM IST. For more news and updates on politics, world, sports, entertainment and lifestyle, log on to our website latestly.com).