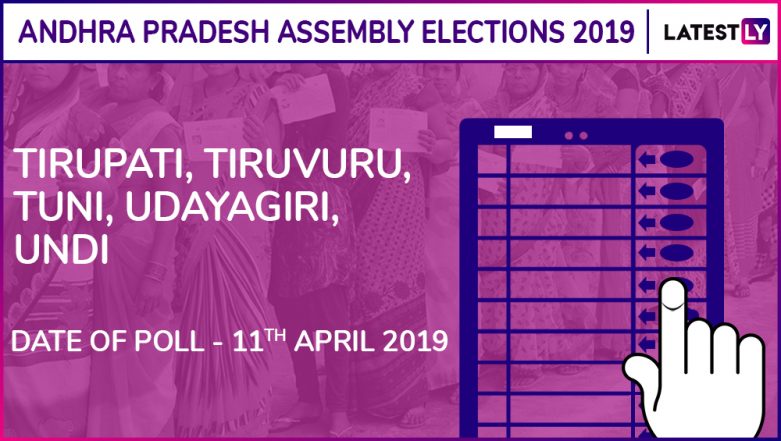 The results for the Andhra Pradesh Assembly Elections 2019 will be announced today. The counting of votes for the 175 constituencies in Andhra Pradesh Assembly began at 8 am and the final list of winners is expected to be out by the end of the day on Thursday. Voting for Tirupati, Tiruvuru, Tuni, Udayagiri, Undi Vidhan Sabha seats took place on April 11 in Phase 1. In Andhra Pradesh, the ruling Telugu Desam Party (TDP) is facing a stiff competition from the YSR Congress Party. Assembly Elections 2019 Results Live News Updates.

In the Andhra Pradesh Assembly Elections 2014, M Venkataramana of the TDP had won the election from Tirupati seat. In 2015, a bypoll was held on this seat, which was won by Mannuru Suguna of the TDP, who will be fighting the 2019 poll as well. The other candidates on this seat for the 2019 polls are K Pramila of the Congress, Bhumana Karunakar Reddy of the YSRCP and Bhavani Sankar Vallamchetty of the BJP among others.

The Tiruvuru seat was won in 2014 AP Assembly Polls by Kokkiligadda Rakshana Nidhi of the YSRCP, who will be fighting the election this year as well. The other candidates for the 2019 polls on this seat are Rajiv Ratan Parasa of the Congress, Pole Santhi of the BJP and Kothapalli Samuel Jawahar of the TDP.

The Tuni seat was won in 2014 by Dadisetti Raja of the YSRCP, who will be fighting polls in 2019 as well. The other candidates for 2019 are Yanamala Krishnudu of the TDP, Eswararao Velaga of the BJP and Dr Pandurangarao of the Congress.

The Udayagiri seat was won in 2014 by Bollineni Venkata Ramarao of the TDP, who will be fighting the 2019 polls too. The other candidates for 2019 Andhra Assembly poll on this seat are Gundlapalli Bharath Kumar of the BJP, Ramesh Duddukuru of the Congress and Mekapati Chandra Sekhar Reddy of the YSRCP among others.

The Undi seat was won in 2014 by VV Siva Rama Raju of the TDP. The candidates this election are Penmatsa Venkata Lakshmi Narasimha Raju of the YSRCP, Gadhiraju Latchiraju of the Congress, Alluri Venkata Satyanarayana Raju of the BJP and Ramaraju Mantena of the TDP among others.

Along with Andhra Pradesh Vidhan Sabha Polls, voting will also be held for Lok Sabha Elections 2019 in the state on April 11. The counting of votes will be held on May 23.