Five civilians were killed in shelling by Russian forces in Ukraine's Donetsk Oblast. 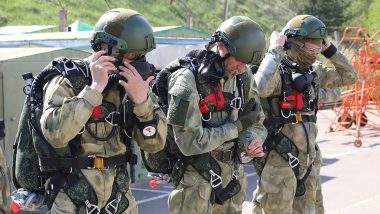 "Russia continues to kill civilians! On 5 July, the Russians killed five civilian residents of Donetsk Oblast: two in Avdiivka, one in Sloviansk, one in Krasnohorivka, and one in Kurakhove," Ukrayinska Pravda quoted

At least 570 residents of Donetsk Oblast have been killed since Russia's invasion of Ukraine.

The number of casualties and fatalities in Mariupol and Volnovakha could not be determined, Kyrylenko added.

(The above story first appeared on LatestLY on Jul 06, 2022 01:17 PM IST. For more news and updates on politics, world, sports, entertainment and lifestyle, log on to our website latestly.com).